We have to understand beauty, or we will always be enslaved by it. 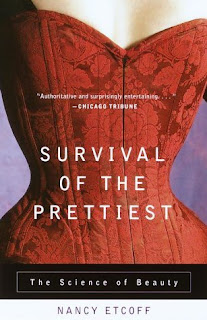 "Beauty is not going anywhere. The idea that beauty is unimportant or a cultural construct is the real beauty myth. We have to understand beauty, or we will always be enslaved by it." (p. 242)


I loved this book because it made sense. Nancy Etcoff (yes, a woman) argues that beauty isn't just some concept constructed by the media in the past century, beauty has always existed and has always been important and there are scientific reasons for this being so. A few of Etcoff's arguments were ehhh, questionable, but for the most part they were really enlightening, smart and well-researched. I think it's silly when people say beauty doesn't matter. OF COURSE it matters, it just doesn't have to be the only thing that matters.
Posted by Noelia de la Cruz at 10:54 PM No comments:

Divide the country up, and let people move to the parts they like

"There are no more abortion clinics in Wichita, or for 200 miles around. You could say Wichita is more Wichita now than it was when George Tiller was alive, a conservative small city in the middle of Kansas, at least one connecting flight away from either coast. Maybe this is the way people want it. Keep abortion to the places where it makes sense. Divide the country up, and let people move to the parts they like. Leave everyone else in peace."

These last words really confused me. I'm not going to lie, when my Magazine Editing professor told my class to choose a magazine to critique, I picked up the closest one I recently bought and chose the article that sounded the most interesting. I read through it quickly, failing to analyze it thoroughly and came up with the conclusion that the writer implies that he sided with the killer. Even up to 1:30 this afternoon, when I went to go see my professor, I stuck by my opinion that the article was incomplete, biased and confusing. He didn't exactly agree but he helped me form a more concise and clear critique to post on our MAG 408 blog.

It wasn't until I came back in the evening and read the conclusion, literally 10 times, that it finally clicked and I understood what Devin Friedman was really trying to say. Here is what I wrote:

"Usually when I pick up a copy of GQ it’s because of who is on the cover. This month, one of the investigative pieces caught my attention.

“Savior vs. Savior” by Devin Friedman is about the death of abortionist George Tiller and the events leading up to his murder in Wichita, Kan. To Scott Roeder, Tiller’s killer, abortions are crimes that must be stopped by whatever means.

Afterward, Wichita, small and conservative, continues to exist as if nothing happened. Tiller’s wife closed the abortion clinic and buried thousands of patient files — never to be seen again. The closest abortion clinic is 200 miles away. The question is not if Roeder succeeds, but why?

“Maybe this is the way people want it. Keep abortion to the places where it makes sense. Divide the country up, and let people move to the parts they like,” Friedman concludes.

These last words troubled me. I was frustrated. Friedman led me through a long, chilling, detailed account from the perspective of a remorseless murderer — who won. I wanted the good to prevail! But it isn’t Friedman’s job to provide a sugarcoated, happy ending. Especially when there isn’t one. Friedman, with a little reverse-psychology and sarcasm, intelligently and successfully challenges the reader to think about our passivity and to evaluate the social issues that continue to plague and divide our nation."

I was relieved to finally understand it (because even though I stuck to my previous opinion it still didn't feel quite right) and it was a sad understanding.

*Also, reading reader's comments on GQ's Web site reveals that I'm not the only one who was confused by the conclusion. I don't know if that says something about our intelligence or Friedman's writing ability (perhaps he could have done it a better way?), but he did ultimately get the point across - at least to me.
Posted by Noelia de la Cruz at 12:35 AM No comments:

New York has never learned the art of growing old

Spatial Practices: Walking in the City from The Practice of Everyday Life
by Michel de Certeau

"Seeing Manhattan from the 110th floor of the World Trade Center. Beneath the haze stirred up by the winds, the urban island, a sea in the middle of the sea, lifts up the skyscrapers over Wall Street, sinks down at Greenwich, then rises again to the crests of Midtown, quietly passes over Central Park and finally undulates off into the distance beyond Harlem. A wave of verticals. Its agitation is momentarily arrested by vision. The gigantic mass is immobilized before the eyes. It is transformed into a texturology in which extremes coincide - extremes of ambition and degradation, brutal oppositions of races and styles, contrasts between yesterday's buildings, already transformed into trash cans, and today's urban irruptions that block out its space. Unlike Rome, New York has never learned the art of growing old in the act of throwing away its previous accomplishments and challenging the future. A city composed of paroxysmal places in monumental reliefs. The spectator can read in it a universe that is constantly exploding."


I'm taking a course called Cities, Spaces and Power - The Anthropology of Urban Life which I find very interesting. Most of the readings aren't, though. :| But I really liked the introductory paragraph of this long and confusing article that I never finished.
Posted by Noelia de la Cruz at 10:32 PM No comments:

Bridget Jones' Diary by Helen Fielding was a pretty amusing, easy read. The quote below isn't even one of the better ones but I thought it was truthful, so.

"Ugh. Would that Christmas could just be, without presents. It is just so stupid, everyone exhausting themselves, miserably hemorrhaging money on pointless items nobody wants: no longer tokens of love but angst-ridden solutions to problems. (Hmmm. Though must admit, pretty bloody pleased to have new handbag.) What is the point of entire nation rushing round for six weeks in a bad mood preparing for utterly pointless Taste-of-Others exam which entire nation then fails and gets stuck with hideous unwanted merchandise as fallout? If gifts and cards were completely eradicated, then Christmas as pagan-style twinkly festival to distract from lengthy winter gloom would be lovely. But if government, religious bodies, parents, tradition, etc., insist on Christmas Gift Tax to ruin everything why not make it that everyone must go out and spend £500 on themselves then distribute the items among their relatives and friends to wrap up and give to them instead of this psychic-failure torment?" (p. 256)

Oh. And.
Okay, Bridget starts her new job at a television station. She walks in late to her interview where her boss is asking for ideas from his team.

"Do you know?" The entire table of grunge youths stared. "You. You must be Bridget!" he shouted impatiently. "How does a man with a beautiful girlfriend manage to sleep with a prostitute, get found out and get away with it?"
I panicked. My mind went blank.
"Well?" he said. "Well? Come on, say something!"
"Well, maybe," I said, because it was the only thing I could think of, "it was because somebody swallowed the evidence."
There was a deathly hush, then Richard Finch started to laugh. It was the most repulsive laugh I've ever heard in my life. Then all the grunge youths started to laugh as well.
"Bridget Jones," said Richard Finch eventually, wiping his eyes. "Welcome to Good Afternoon! Take a seat, my darling," and then he winked. (p. 171)

Bridget's life is a mess which is maybe why it's so fun to read, lol. My professor thinks it's the perfect model to explain how men and women interact and often references Jane Austen to explain how, though times have changed, themes of love, sex and relationships still apply in our lives in the same ways.
Posted by Noelia de la Cruz at 8:09 PM No comments: