All cities can be endlessly improved by a heterodox profusion of creativity. 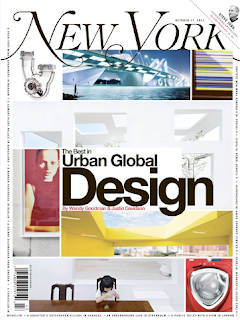 I meant to post this yesterday, but I fell asleep. Life is exhausting and mustering up the energy to blog regularly (even seemingly simple posts) has been difficult. But it's not that I haven't been reading. I'm currently an intern at New York Magazine and aside from keeping up with current events and blogs (most of which I'm linked to via Twitter), I've been reading each week's issue. It occurred to me Saturday that, duh, I should blog about what I've read in the magazine. Every issue has such great content, I fall more in love with the magazine each week. The most recent issue, aside from the one that hit stands today, is the Urban Global Design issue (10/17/11). It's the first major issue I've assisted with since my internship started a little more than a month ago; it took me a few days to open it up and want to read it for reasons that I may eventually explain here, but once I did, I couldn't deny that the issue was impressive. It was nice to see how wonderfully it all came together in the end. And it was so exciting to work on! Urban design, cities, and how urban design shapes and defines those cities is a topic I've long been interested in.

My favorites from this issue:

1. Bailout Ball by Will Leitch -- I don't really follow the NBA but the lockout sucks for the fans, and probably even more so for the players. Leitch highlights their powerlessness.

2. They See Rich People by Diana Spechler -- A quirky perspective. I really enjoyed this piece.

3. Design: City As Lab by Wendy Goodman (design editor) and Justin Davidson -- An introduction to the cover package. All cities are different and all cities can be endlessly improved by a heterodox profusion of creativity.


4. The Delirious City: A Survey, reporting by Jillian Goodman, Andre Tartar, and Kat Ward -- Love this compilation created by surveying the world's most prominent architects, critics, urban planners, etc. Think my favorite is the Wikileaks' data center, for sure. Second favorite, the kindergarten classroom in a tree.

5. Design Hunting: Global Edition by Wendy Goodman, some reporting by Rachel Baker* -- I'm attached to this section because I spent the last month and a half or so helping with it. My favorites are the cement plant in Barcelona, the Rotterdam Market Hall, and the Warsaw installation.

*I saw this post received a view and as I reread it, I realized now is a good time to edit this slightly. I'm editing this 3+ years later (11/8/14) to say that I  conducted the interview and wrote the post for the Warsaw installation blurb. I didn't want to mention it then because I was still an intern. But I remember being really upset at the time that I wrote it and that it was attributed to one of the editors. I've also since realized that this is often the way it goes when you're at the bottom. And one day it won't be as such.

7. Back In The Day-O by Joshua Jelly-Schapiro. Interview with Harry Belafonte. Loved the bit about the role models not living in the neighborhoods anymore. And how ironic that Barack Obama's father was one of the students sponsored by Belafonte to come to America!

I'll try to post some links from the previous issues soon. And I'm excited to post about this week's issue, whose cover story is about my "post-hope" generation, and how maybe we're not so hopeless, after all.
Posted by Noelia de la Cruz at 1:25 AM No comments: