I need to find a women's magazine to obsess over, I think.
Posted by Noelia de la Cruz at 6:33 PM No comments:

Bruschetta is not pronounced "brooshetta" 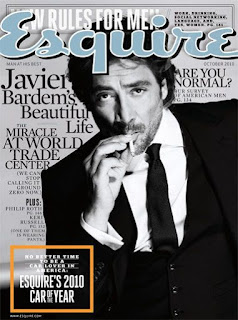 Next: October 2010 Esquire issue with the beautiful Javier Bardem on the cover. Disappointed by Chris Jones's cover story, not gonna lie. But love the new rules for men. They're so funny. The following two made me giggle:
Rule No. 911: Bruschetta is not pronounced "brooshetta."
Rule No. 912: Though if you pronounce it "broosketta," you will seem pretentious.
Because, having lived in Italy for a semester, I can no longer say "brooshetta." But I know every time I pronounce it correctly I sound like a douche. But not doing so makes me feel like such a traitor to the Italian language and my lovely host parents who treated me to bruschetta (with homemade olive oil!) many a night. Dilemmas!
The whole spread here (the only place I could find it).

Posted by Noelia de la Cruz at 5:53 PM No comments:

Franco smiles his ungrudgingly adolescent smile, a grin as terminally satisfying as the last healthy squeeze on a tube of toothpaste. 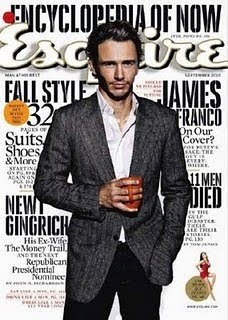 Me and my friend Kathleen laughed to the point of tears and aching stomachs the other day from reading this list of the 25 funniest analogies.

As I read through Esquire's September 2010 issue, I noticed this line from Tom Chiarella's "The Itinerant Artist," a profile on James Franco:

"When asked what he's reading, Franco smiles his ungrudgingly adolescent smile, a grin as terminally satisfying as the last healthy squeeze on a tube of toothpaste." (p. 124).

The Bonfire of the Vanities 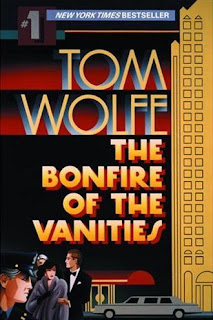 The Bonfire of the Vanities, Tom Wolfe
OK, so I'm breaking my own blog rule and I'll try not to do it again, but I don't have a specific passage to quote from this one. I just want to say, you have to read it. Wolfe combines all the political, social, financial, and racial issues that New York City faced in the 1980's into one compelling, entertaining plot.
Posted by Noelia de la Cruz at 5:22 PM No comments: 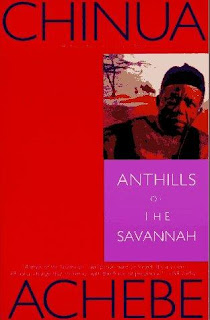 Anthills of the Savannah, Chinua Achebe
"That afternoon he was punished most dreadfully at the beach and he laughed to his pink gums and I listened painfully for the slightest clink of the concealed weapon in the voluminous folds of that laughter." (p.37)
- I really liked the way "voluminous folds" sounded
"Going up to it now with the great shimmering expanse of the artificial lake waters stretching eastwards into the advancing darkness on your left and the brightly lit avenue taking you slowly skywards in gigantic circles round and up the hill, on top of which the Presidential Retreat perches like a lighthouse, was a movingly beautiful experience even to a mood as frayed and soured as mine that evening." (p. 67)
"'Nations,' he said, 'were fostered as much by structures as by laws and revolutions. These structures where they exist now are the pride of their nations. But everyone forgets that they were not erected by democratically-elected Prime Ministers but very frequently by rather unattractive, bloodthirsty medieval tyrants. The cathedrals of Europe, the Taj Mahal of India, the pyramids of Egypt and the stone towers of Zimbabwe were all raised on the backs of serfs, starving peasants and slaves. Our present rulers in Africa are in every sense late-flowering medieval monarchs, even the Marxists among them.'" (p.68).
Posted by Noelia de la Cruz at 4:07 PM No comments:

All I have is intense curiosity.

Gay Talese, The Art of Nonfiction No. 2, interviewed by Katie Roiphe

"But the column gave me an excuse to talk to others. It was not unlike my mother talking with the wealthy women in her dress shop. Doing journalism made me feel that, even if I wasn't part of their group, I had a right to be there."

"All I have is intense curiosity. I have a great deal of interest in other people and, just as importantly, I have the patience to be around them."

"My first job was on the sports desk, but I didn't want to write about sporting events. I wanted to write about people. I wrote about a losing boxer, a horse trainer, and the guy in the boxing ring who rang the bell between rounds. I was interested in fiction. I wanted to write like Fitzgerald. I collected his work--his short stories and journals. "Winter Dreams" is my favorite story of all time. The good nonfiction writers were writing about famous people, or topical people, or public people. No one was writing about unknown people. I knew I did not want to be on the front page. On the front page you're stuck with the news. The news dominates you. I wanted to dominate the story."

"I never turned in anything more than two minutes before deadline. It was never easy, I felt I had only one chance. I was working for the paper of record, and I believed that what I was doing was going to be part of a permanent history."

"I take it very seriously. This is a craft. This is an art form. I'm writing stories, just like fiction writers, only I use real names."

"I turned in the piece at roughly a hundred pages. They didn't change a word."
-in reference to "Frank Sinatra has a Cold"

"I try to tell the reader where my characters come from, and how they got to the point where I've found them. It never is just present tense. It's always also about past tense."

"The only thing I could think of was to start a college fund, which I set up for my own daughters at the same time. Honor Thy Father paid for college for all four of the Bonanno children and my daughters. I'm glad I did it because I have the evidence now that it was the right decision. The four Bonanno children are straight, and one of them is even an important doctor. None of them have had to do what their father chose to do."

"A case could be made that this is my main failing as a person. I am never there. Fully."

So inspiring. Everything he says is why I want to be a journalist.
Posted by Noelia de la Cruz at 6:55 PM No comments: