I've been mistaken for being everything except what I am: Dominican. 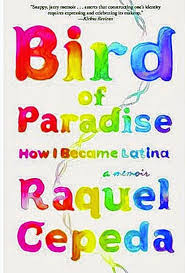 Bird of Paradise: How I Became Latina
By Raquel Cepeda

I identified strongly with Raquel Cepeda's mission of self-discovery. I'm Dominican-American too and aware of my family's complex makeup but there is so much more to know. I would love to take a genetic test & have my family members do the same. My grandfather immigrated to the Dominican Republic from China in the 1940s, but I know very little about my maternal grandmother's or my paternal grandparents' family histories. Family Tree DNA, the genetic genealogy company Cepeda used to discover her ancestral roots, is based in Houston. I hope to connect next time I'm in town to visit my mama.

"I've always been intrigued by the concept of race, especially in my own community and immediate family, where it's been a source of contention for as long as I can remember. The United States has the second highest Latino population in the world, second only to Mexico. And still, the media--they lump us all together into one generic clod--doesn't get us either. Are Latino-Americans white? Black? Other? Illegal aliens from Mars? Or are we the very face of America?
Some see Latinos as the embodiment of this young country's cultural melting pot. And though Mexicans have been residing here since before the arrival of the first Europeans, many of our fellow Americans view Latinos as public enemies. What our parents see isn't necessarily what we first- and second-generation American-born Latinos see when looking at ourselves in the mirror. According to the 2010 census, over half of all Latinos here identified as being solely white, and about a third checked "Some Other Race." I was one of the three million, or 6 percent, who reported being of multiple races. I guess it all depends on whom you ask and when you ask. Race, I've learned, is in the eye of the beholder.
I don't look all the way white or all the way Black; I look like someone who's a bit of both and then some--an Other. In Europe, people have mistaken me for Andalusian, Turkish, Brazilian, and North African. In North and West Africa, I've been asked if I'm of Arabic or Amazigh descent. In New York, Los Angeles, and Miami, it varies: Israeli or Sephardic, Palestinian, Moroccan, biracial Black and white American, Brazilian, and so on. I've been mistaken for being everything except what I am: Dominican. My own racial ambiguity has been a topic of conversation since I was a teenager. Blending in has filled the pages in my book of life with misadventures and the kind of culturally enriching experiences that make me feel, truly, like a world citizen."
(pp. xiv-xv)

This caught my attention because I have O positive blood:
"In the 1950s, before ancestral DNA testing, researchers studied a fairly new popular Taino settlement in the northeast, originally founded by Enrique, one of the last caciques of the colonial period. They saw high percentages of blood types found in Indigenous-Native-Americans: O positive, with no Rh-negative factor, like Dad. In the '70s, they studied dental records that proved Indigenous retention in the same village: shovel-shaped incisors in thirty-three out of seventy-four people, also characteristic of Native-Americans and their Asian ancestors.
In 2006, a national haplogroup-A mitochondrial DNA survey on the island examined hair root samples taken from sites throughout the Dominican Republic. The results indicated that the northern, central, and eastern regions of the country had the highest percentage of Amerindian ancestry. Haplogroups B and C obtained higher frequencies in the east, and one of only two samples taken in the west belonged to haplogroup A. When further analyses were conducted on the haplogroup A samples, nine lineages were identified in the Dominican Republic: three post-Columbian and six pre-Columbian.
Studies with healthier population samples should be undertaken because the Dominican Republic currently has a population of over ten million people. If more studies are done, more pre-Columbian history--silenced due to genocide by Academia and European chroniclers--will reveal a rich and diverse narrative."
(p. 221)
Posted by Noelia de la Cruz at 6:17 PM No comments: