“In a time of crisis, the peoples of the world must rush to get to know each other.” 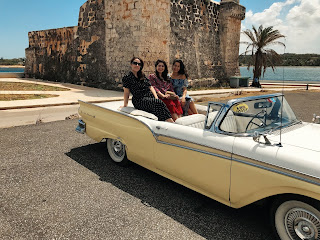 "The country’s complex identity is inherently bound up in the duality of this proximity, in its ability to feel both so close and yet so far away at the same time."

"So then why go to Cuba and dive into the cross hairs of both diplomatic and acoustic uncertainty? Because this is why we travel. As José Martí, Cuba’s talismanic national poet and philosopher once wrote, “In a time of crisis, the peoples of the world must rush to get to know each other.” No one can predict what will happen to Cuba in the coming years, which is why you must rush there now. As in, right now. To visit is to witness a rare bird about to fly the coop."

"We were constantly called out by strangers: “Where are you from?” People beamed when we told them. “We love the U.S. I have a cousin in Queens. It’s cold there, yes? I would die. Please tell everyone that Cuba is beautiful. No Mafia, no war. Just Mojitos and salsa dancing.” Hand on stomach, the dance was demonstrated, the toe expertly twirled in the dust."

"And you come for the sound. Havana is a land of sound. Never have I been to a place whose identity is so entangled in its auditory fingerprint. The guttural putt putt of eight cylinder Cadillacs built before my father was born; the ocean rising and slapping at the Malecón like a newborn babe; the dip and pull of the timbale’s bell chattering at a bar across the street, tin tin — tin tin tin; the shuffle of a man demonstrating salsa for you on the sidewalk; the swish and chop of a broom on a doorstep; the plush boom of the ceremonial cannons fired every evening from the Fortaleza de San Carlos de la Cabaña; the clink of ice cubes in the most delicious mojito de piña you will ever taste."

Cuba is beautiful. The favorites of my photos after the jump. One day I'll be a decent photo editor, but for now I Vsco'd the shit out of these.
Read more »
Posted by Noelia de la Cruz at 7:38 AM No comments: