We might as well appreciate Dickey while we have the chance. 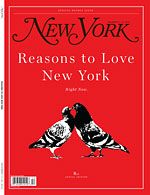 Reasons to Love New York 2012
No.8: Because the best story in baseball is somehow a Met.
by Will Leitch

"We might as well appreciate Dickey while we have the chance. Nothing this great can stay in Flushing for long."

I wasn't crazy about this Reasons to Love New York edition, to be honest. There were a few fine pieces but nothing spectacular. Blogging this though because I'm a Mets fan, an R.A. Dickey fan, and a Will Leitch fan. Unfortunately, R.A. Dickey was traded to the Toronto Blue Jays the week this issue came out. So sad! A great person and player for the Mets so, of course, we had to lose him.
Posted by Noelia de la Cruz at 10:41 PM No comments:

The one essential quality is curiosity.

I finally finished The Gay Talese Reader! Long overdue. Of the four stories I had left to read, I wasn't crazy about "Ali in Havana," but loved "The Brave Tailors of Maida," featuring an anecdote about Gay Talese's father as an 8-year-old apprentice for a tailor in Calabria, Italy.

Excerpts from the remaining two stories below.

Origins of a Nonfiction Writer

"I learned to listen with patience and care, and never to interrupt even when people were having great difficulty in explaining themselves, for during such halting and imprecise moments (as the listening skills of my patient mother taught me) people often are very revealing--what they hesitate to talk about can tell much about them. Their pauses, their evasions, their sudden shifts in subject matter are likely indicators of what embarrasses them, or irritates them, or what they regard as too private or imprudent to be disclosed to another person at that particular time." (p. 228)

"Although I continued to forgo asking young women to dances, I sometimes did go alone in my new role as a social columnist. For individuals who were as shy and curious as myself, journalism was an ideal preoccupation, a vehicle that transcended the limitations of reticence. It also provided excuses for inquiring into other people's lives, asking them leading questions, and expecting reasonable answers; and it could as well be diverted into serving any number of hidden personal agendas." (p. 240)

"It was during my obituary-writing period that I also began to concentrate on writing for the Times Sunday Magazine, for I was in the "doghouse" with the daily edition. After my cat story I did about thirty more Times magaziners in the months that followed. I wrote about silent-screen actresses in an age of sound, about old men who rang the bells during boxing matches at Madison Square Garden, about the river captains of the Staten Island ferries, about the window designers of Fifth Avenue boutiques and the sculptures of the plastic but nonetheless alluringly realistic female mannequins ... Advice to young writers? The one essential quality is curiosity, in my opinion, and the energy to get out and learn about the world and about people who lead unique lives, who dwell in obscure places."

Posted by Noelia de la Cruz at 1:32 PM No comments: