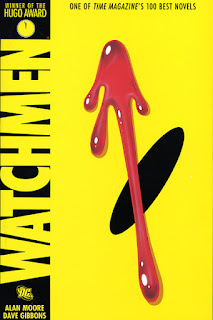 Watchmen. I can't remember the last time I read a book so engrossing. I love it. I missed that. I missed reading!

I found the following excerpt on Tumblr a few months ago and reblogged it because I loved it so much, completely unaware of the fact that it came from Watchmen. Jon brings Laurie to Mars, where he has escaped to. She tries to convince him to return to Earth, as it is chaotic and destructive with his absence, but he doesn't believe it's worth it. He believes life is meaningless, that she's meaningless. They fight. She cries. He realizes he's wrong. He says:
"Thermodynamic miracles ... events with odds against so astronomical they're effectively impossible, like oxygen spontaneously becoming gold. I long to observe such a thing. And yet in each human coupling, a thousand million sperm vie for a single egg. Multiply those odds by countless generations, against the odds of your ancestors being alive, meeting, siring this precise son, that precise daughter ... until your mother loves a man she has every reason to hate, and of that union, of the thousand million children competing for fertilization, it was you, only you, that emerged. To distill so specific a form from that chaos of improbability, like turning air to gold ... that is the crowning unlikelihood. The thermodynamic miracle. But the world is so full of people, so crowded with these miracles that they become commonplace and we forget ... I forget. We gaze continually at the world and it grows dull in our perceptions. Yet seen from another's vantage point, as if new, it may still take the breath away."

Email ThisBlogThis!Share to TwitterShare to FacebookShare to Pinterest
Labels: watchmen