She could only see the back of its great, beautiful head, still lifted high. 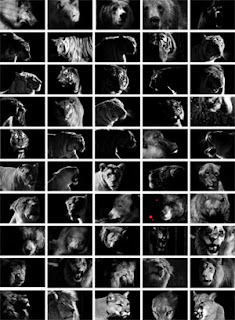 Animals by Chris Jones
Esquire, March 2012
This story made me sad, excited, scared. It was wonderful. It started off a little slow (necessary though to introduce everything), but once Chris Jones got to the meat, the action, I couldn't put the story down. I hadn't heard of this when it happened (though I feel like I should have...), but Jones indicates that there was a lot of misunderstanding about what happened that night, so he got to the bottom of it. The massacre was a necessary choice the police had to make given the circumstances. And like Todd Kanavel, one of the detectives, told Jones, "I think people were thinking we were hooping and hollering, like a bunch of rednecks. This was a police operation."
There was range of emotion. One officer felt tormented by having to kill the beautiful animals. Excitement. There's confusion and awe regarding Thompson's suicide. Man, the part with the white tiger—it just killed me. In the end he was torn to pieces by one of his animals. Just wow. Also, Chris Jones is just a really great fucking writer. GQ's Chris Heath covered the same story in its March 2012 issue, so there was talk about that. I've only read the first graf, just now. They both started with the same scene: the horses. I imagine I'll read the rest later but for now I'll say: no competition.
Esquire also released the first ever magazine article trailer to hype the story.


This part. Wow.
"They got out of the cruiser, and they both saw Terry Thompson, down a short enbankment, bloody and lying flat on his back. There was a pistol on the grass; Blake didn't see the blue bolt cutters that were lying about ten feet away. A tiger—a white tiger, a genetic mutant was gnawing at Thompson's head. Most of the top of his head was missing; other parts of him had also been eaten. Now the white tiger dragged Thompson around, puncturing his throat with his teeth. There was a lot of blood. Behind his body, a small trash fire smoldered. Smoke rose into the darkening sky. "I'll always wonder what he didn't want us to find," Blake says. The tiger continued to feed."
This was kind of funny. Jones introduced this part after some of the intensity had subsided and I just thought it was so ridiculous that a group of people drove up to the farm that night after hearing what happened and tried to steal one of the dead lions. Also, kind of shows the extent of Jones reporting. When the police (I assume) told him someone had done this, he went and found them.
"The five friends, who were later charged with misdemeanor theft, were told to return their stolen lion to the farm. A deputy followed them in his cruiser, and he radioed Lawhorne and Swope, asking them to meet him at the bottom of the driveway. They lashed ropes around the lion and dragged it out of the Jeep, leaving a bloodstain in the back. After, Lawhorne and Swope talked about what would have happened had the lion theft gone uninterrupted: Most important, there would have been a lion missing from the count. For weeks or months or even years after, there would have been calls about the phantom lion of Zanesville, a knife-toothed ghost that would appear in nighttime imaginations until it finally became legend, when all the while it was just a skin spread out on the floor of a house in Cambridge, warming the feet of five friends playing cards."
"Depending on your proximity to Zanesville, Ohio, and your feelings about the relative value of animal life, what happened at the farm was either one of the worst mass shootings in American history or a miracle. Other than Terry Thompson, no humans had suffered an injury outside of hearing loss. More than forty animals had been shot. One, a monkey, had been torn apart by the big cats, its shredded body sprawled out by the house. Six animals had survived, because Thompson had left them locked away in their pens in the house, for reasons known only to him: the three leopards, the small bear, and the two screaming monkeys."
"Wolfe got her tranquilizer gun, a black, bolt-action rifle with a scope. She also had a plastic case, like a tackle box, filled with darts of varying size. Tranquilizing animals is a tricky business. Animals fight artificial sleep, especially panicked ones. Their systems might resist the tranquilizer for ten or fifteen minutes, maybe more. Different animals also require different drugs and different amounts of them, depending on the species, how much they weigh, and whether they've eaten recently. Too much tranquilizer and the animal might die; not enough and the animal will only be enraged by it. Trajectory physics also complicate matters. Darts don't behave like bullets. They are not nearly as consistent in their flight, and it doesn't take much to knock them off their intended course. They need to find muscle."
The death of the last animal. Can't lie, this part made me tear.
"Wolfe shook her head and told the men to wait. After a full ten minutes had passed, she crept back into the woods. And there was the tiger in front of her—still alive and still awake. Its breathing was labored, but its head was raised. Wolfe watched the tiger for a moment. She stood in the rain and watched, the only time in her life she had ever been so close to a living tiger without seeing it through the bars of a cage. The tiger's head was turned away from her. She never did see its eyes. She could see only the back of its great, beautiful head, still lifted high, while its body settled deep into the soft ground, sinking deeper with each breath. Wolfe stepped back, and the men took her place. Lawhorne raised his M4 to his shoulder, and he pulled the trigger, and the last Zanesville tiger finally fell, the sound of the bullets echoing between the trees."
Posted by Noelia de la Cruz at 8:55 AM