All the things instilled in me from a young age by my family and home, rehydrated and brought to life like instant noodles. 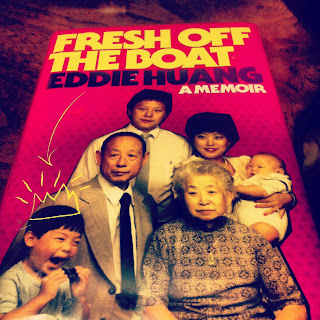 Fresh Off the Boat: A Memoir
By Eddie Huang

"There wasn't a section in the library titled "Books for Abused Kids" but there was black history and somehow, some way, it made sense to me. I listened to 2Pac. I remember when "Me Against the World" came out, Emery and I would just sit by the radio reading comics listening to that song over and over. People in Orlando never understood why two Asian kids were rocking Polo, Girbauds, and listening to hip-hop. We didn't do it because it was cool. At private school, teachers, parents, and other kids looked down on us for listening to hip-hop. It was a "black thing," downward assimilation. They didn't understand why we had flattops and racing stripes in our heads, but we did.

And when you get stranded
And things don't go the way you planned it
Dreamin' of riches, in a position of makin' a difference

Pac made sense to us. We lived in a world that treated us like deviants and we were outcast. There was always some counselor or administrator pulling us out of class to talk. We stayed in detention and we were surrounded by kids who had no idea what we were going through. We listened to hip-hop because there wasn't anything else that welcomed us in, made us feel at home. I could see why Milli wanted to pull a pistol on Santa or why B.I.G. was ready to die. Our parents, Confucius, the model-minority bullshit, and kung fu-style discipline are what set us off. But Pac held us down."
(p. 60)

"Justin called me "Gourmet," 'cause every time we got high, I couldn't just eat the chips or cookies. I made ill stoner food, like Doritos sandwiches, where I took ham, turkey, and cheese and rolled it up on plates, then sandwiched them between Doritos. I'd microwave cookies and eat them with ice cream, bake macaroni and cheese with crushed Cheetos on top, real disgusting Scooby snacks. A few years later at a bachelor party in Miami, after hitting Miami Gold, pissing off the VIP balcony onto the dance floor at Voodoo, and copping frozen chimichangas at 7-Eleven, we went back to our hotel. Total fail, because we didn't have a microwave in the room, but I didn't give up. I told my homies, "Ay yo, let me get the ironing board and iron!"
I put the frozen chimichangas on plates and started ironing the shits. Fifteen minutes later, we were eating chimichangas with crispy exteriors and I was officially the Iron Chef."
(p. 111)

"When people don't give you the time off work or school to celebrate the most important day of the year for your people, you lose yourself. How are you supposed to maintain your identity in America without your holidays? If not all of them, then how about one? It wasn't just about Chinese New Year, though. I was sick and tired of half-assed potlucks thrown by ABCs (American Born Chinese) who didn't even know how to cook Chinese food. These same ABCs couldn't speak Chinese and didn't care -- but you don't have shit without your native tongue. African slaves were forced by threat of physical punishment to abandon their native languages, but a lot of us just gave ours up with a shrug--these Uncle Chans convinced us to assimilate, shut the fuck up, and play the part. What they didn't understand is that after you have the money and degrees, you can't buy your identity back. I wasn't worried about degrees, but I cared about my roots. Even if I hated what it meant to be an Asian in the American wilderness, I respected the Chinese home I was raised in. Usually I wasn't so vocal about Asian identity, but without my parents around, I felt a sudden duty to say something myself. It's funny how annoying I thought my mom was, but as soon as she wasn't around, I carried the torch for her."
(p. 157)

"Ning also got me back in touch with my identity. While I was out drinking Mad Dog 40/40 and running over frat boys with Mitsubishi Monteros, she went to Chinese school on weekends all the way up until her senior year of high school. Instead of sneaking into bars or clubs, she was going to Bubble Island with her girlfriends. We kept making fun of each other, but as they say, opposites attract. I had become so obsessed with not being a stereotype that half of who I was had gone dormant. But it was also a positive. Instead of following the path most Asian kids do, I struck out on my own. There's nature, there's nurture, and as Harry Potter teaches us, there's who YOU want to be. Every part of me was something I sought out and encountered. And that summer in Taipei, I looked around and saw myself everywhere I went. Pieces of me scattered all over the country like I had lived, died, burned, and been spread throughout the country in a past life. Here I was coming home to find myself again in street stalls, KTV rooms, and bowls of beef noodle soup. All the things instilled in me from a young age by my family and home, rehydrated and brought to life like instant noodles. They never left, they just needed attention."
(p. 198)