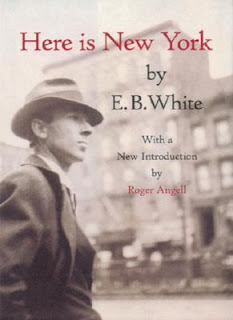 "New York is the concentrate of art and commerce and sport and religion and entertainment and finance, bringing to a single compact arena the gladiator, the evangelist, the promoter, the actor, the trader and the merchant. It carries on its lapel the unexpungeable odor of the long past, so that no matter where you sit in New York you feel the vibrations of great times and tall deeds, of queer people and events and undertakings." (p. 19-20)

"A poem compresses much in a small space and adds music, thus heightening its meaning. The city is like poetry: it compresses all life, all races and breeds, into a small island and adds music and the accompaniment of internal engines. The island of Manhattan is without any doubt the greatest human concentrate on earth, the poem whose magic is comprehensible to millions of permanent residents but whose full meaning will always remain elusive." (p. 29)

"The subtlest change in New York is something people don't speak much about but that is in everyone's mind. The city, for the first time in its long history, is destructible. A single flight of planes no bigger than a wedge of geese can quickly end this island fantasy, burn the towers, crumble the bridges, turn the underground passages into lethal chambers, cremate the millions. The intimation of mortality is part of New York now: in the sound of jets overhead, in the black headlines of the latest edition." (p. 54)

"A block or two west of the new City of Man in Turtle Bay there is an old willow tree that presides over an interior garden. It is a battered tree, long suffering and much climbed, held together by strands of wire but beloved of those who know it. In a way it symbolizes the city: life under difficulties, growth against odds, sap-rise in the midst of concrete, and the steady reaching for the sun. Whenever I look at it nowadays, and feel the cold shadow of the planes, I think: "This must be saved, this particular thing, this very tree." If it were to go, all would go--this city, this mischievous and marvelous monument which not to look upon would be like death." (p. 56)
Posted by Noelia de la Cruz at 6:50 PM