The words induced me to turn towards myself. 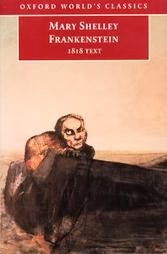 "'This reading had puzzled me extremely at first, but, by degrees, I discovered that he uttered many of the same sounds when he read as when he talked. I conjectured, therefore, that he found on the paper signs for speech which he understood, and I ardently longed to comprehend these also; but how was that possible, when I did not even understand the sounds for which they stood as signs? I improved, however, sensibly in this science, but not sufficiently to follow up any kind of conversation, although I applied for my whole mind to the endeavor: for I easily perceived that, although I eagerly longed to discover myself to the cottagers, I ought not to make the attempt until I had first become master of their language; which knowledge might enable me to make them overlook the deformity of my figure; for with this also the contrast perpetually presented to my eyes had made me acquainted.
'I had admired the perfect forms of my cottagers -- their grace, beauty, and delicate complexions: but how was I terrified, when I viewed myself in a transparent pool! At first I stared back, unable to believe that it was indeed I who was reflected in the mirror; and when I became fully convinced that I was in reality the monster that I am, I was filled with the bitterest sensations of despondence and mortification. Alas! I did not yet entirely know the fatal effects of this miserable deformity." (p. 90)

"'The words induced me to turn towards myself. I learned that the possessions most esteemed by your fellow-creatures were, high and unsullied descent united with riches. A man might be respected with only one of these acquisitions; but without either he was considered, except in very rare instances, as a vagabond and a slave, doomed to waste his powers for the profit of the chosen few. And what was I? Of my creation and creator I was absolutely ignorant; but I knew that I possessed no money, no friends, no kind of property. I was, besides, endowed with a figure hideously deformed and loathsome; I was not even of the same nature as man. I was more agile than they, and could subsist upon coarser diet; I bore the extremes of heat and cold with less injury to my frame; my stature far exceeded theirs. When I looked around, I saw and heard none like me. Was I then a monster, a blot upon the earth, from which all men fled, and whom all men disowned?" (p. 96)

"'Of what a strange nature is knowledge! It clings to the mind, when it has once seized on it, like a lichen on the rock. I wished sometimes to shake off all thought and feeling; but I learned that there was but one means to overcome the sensation of pain, and that was death -- a state which I feared yet did not understand. I admired virtue and good feelings, and loved the gentle manners and amiable qualities of my cottagers; but I was shut out from intercourse with them, except through means which I obtained by stealth, when I was unseen and unknown, and which rather increased than satisfied the desire I had of becoming one among my fellows." (pp. 96-7)