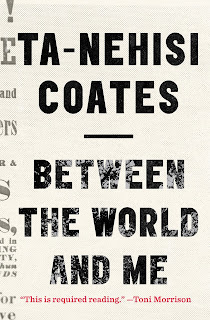 Between the World and Me
By Ta-Nehisi Coates

I finished this book last Saturday and immediately thought, "I have to read this again." I finished it for the second time today. I want everyone I know to read it in the hopes we can share the same experience -- that of my eyes and mind opening a little wider, enough to stretch my capacity for empathy, passion, understanding, and anger, more than was possible before. (And I am already very much capable of all of the above.) I witness the brutalities and injustices in this world & country -- especially towards black and Latino women & men -- via the news and continually feel angry but helpless. I came out of this reading experience feeling like there was so much more I should know but didn't. I felt similarly after completing The Autobiography of Malcolm X. Ta-Nehisi's words, his intention, his message--directed to his son but meant for everyone--are so beautiful and necessary. It almost feels unjust to reblog so much of what he's written, so I'll try to limit the excerpts:

"I remember being amazed that death could so easily rise from the nothing of a boyish afternoon, billow up like fog."
(p. 20)

"I loved Malcolm because Malcolm never lied, unlike the schools and their facade of morality, unlike the streets and their bravado, unlike the world of dreamers. I loved him because he made it plain, never mystical or esoteric, because his science was not rooted in the actions of spooks and mystery gods but in the work of the physical world. Malcolm was the first political pragmatist I knew, the first honest man I'd ever heard. He was unconcerned with making the people who believed they were white comfortable in their belief. If he was angry, he said so. If he hated, he hated because it was human for the enslaved to hate the enslaver, natural as Prometheus hating the birds. He would not turn the other cheek for you. He would not be a better man for you. He would not be your morality. Malcolm spoke like a man who was free, like a black man above the laws that proscribed our imagination. I identified with him. I knew that he had chafed against the schools, that he had almost been doomed by the streets. But even more I knew that he had found himself while studying in prison, and that when he emerged from the jails, he returned wielding some old power that made him speak as though his body were his own. "If you're black, you were born in jail," Malcolm said. And I felt the truth of this in the blocks I had to avoid, in the times of day when I must not be caught walking home from school, in my lack of control over my body. Perhaps I too might live free. Perhaps I too might wield the same old power that animated the ancestors, that lived in Nat Turner, Harriet Tubman, Nanny, Cudjoe, Malcolm X, and speak--no act--as though my body were my own."
(pp. 36-7)

Email ThisBlogThis!Share to TwitterShare to FacebookShare to Pinterest
Labels: Between the World and Me, Malcolm X, Ta-Nehisi Coates, The Autobiography of Malcolm X