"I have no bent toward gods. But I have a new love for that glittering instrument, the human soul." 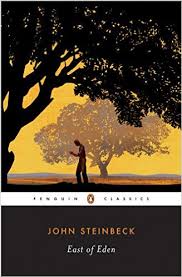 Someone on Goodreads described this novel as "delicious," and I think that's pretty apt—it is rich in story, description, humanity—and it satiated my literary appetite, if you will. The last sentences gave me a jolt and made me cry. Steinbeck is officially a favorite.

I should add my grandfather, a Lee, arrived to San Francisco from China in 1948 so I felt an extra closeness to this character and excerpt somehow. I could picture abuelo as a member of this association, ha. He might've stayed instead of going to the Dominican Republic and, well, how different everything would be. I'm not sure whether Steinbeck did this on purpose, but so fitting that this should appear exactly halfway through the story:

"I was thinking about that time when Sam Hamilton and you and I had a long discussion about a word," said Adam. "What was that word?"
"Now I see. The word was timshel."
"Timshel--and you said--"
"I said that word carried a man's greatness if he wanted to take advantage of it."
"I remember Sam Hamilton felt good about it."
"It set him free," said Lee. "It gave him the right to be a man, separate from every other man."
"That's lonely."
"All great and precious things are lonely."
"What is the word again?"
"Timshel--thou mayest."
(pp. 522-3)

Email ThisBlogThis!Share to TwitterShare to FacebookShare to Pinterest
Labels: East of Eden, free will, John Steinbeck, The Bible, timshel, wisdom