Then I realized that oftentimes existing is activism in itself. 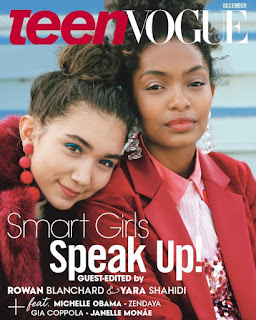 This former Teen Vogue subscriber bought the December 2016 issue as a way to show support for an outlet that published this article during a time when other outlets were still tiptoeing around calling Trump out on his shit. Lauren Duca received a lot of hate on the internet because of it, as well as praise. Editor in chief Elaine Welteroth and digital editorial director Philip Picardi have also been lauded for the work they've done to elevate the magazine's work in the past year. (See this great interview where they explain the magazine's evolution to Trevor Noah.)

Last week, in a weird form of nostalgia, I started watching Girl Meets World on Netflix. I am...a huge Boy Meets World fan. While this "sequel" is extremely cheesy (hi Disney), Girl Meets World has a lot of heart. I like heart and anything that can find the sweet spot of making you both feel good laugh and cry. Maybe because I've felt so conflicted lately, the messages work for me despite the delivery. There are, inevitably, a ton of BMW references and I'm also a new fan of Rowan Blanchard. I admire her commitment and willingness, at such a young age, to speak to female empowerment and human rights. I've said it before and I'll say it again: young women today need organizations and people like her and I wish I had them to look up to when I was younger.

I'm not sure this ever changes (I'm 12 years older than her and still feel this way):

Rowan Blanchard and Gia Coppola on Why Teenagers Are the Best

"Sometimes I notice that I still write exactly how I wrote when I was younger, it’s just that the words are more articulate now. It’s the same emotions, the same feeling like, Gosh, this is never gonna be over and this is the worst time in my life, when it’s not at all. The worst times in my life are the ones I don’t even write about. I can’t put it on paper."
-RB

Rowan Blanchard and Yara Shahidi on Representation
"My need to be an activist came very much from a need to understand history. And how things that happened before have influenced what’s happening now. We covered Rosa Parks for, like, three days in history. But there is so much more than what is in the history books. To me, activism is a need to know, a need to explain, and a need to help. At first I was very scared of the term. I thought, Am I actually doing enough? Then I realized that oftentimes existing is activism in itself. For instance, I think it’s brave for girls to go to college when there is a one-in-four chance that they will be raped. That in itself is activism. I wish all girls and people of color called themselves activists."
- RB