“We the people,” all of us, are living together in perhaps the greatest social and governmental experiment ever conceived. 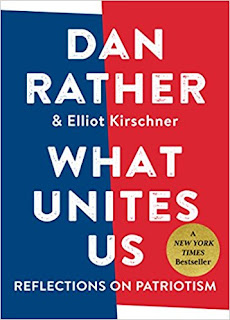 What Unites Us: Reflections on Patriotism
By Dan Rather & Elliot Kirschner

In a year filled with a despairing news cycle, I often look forward to Dan Rather’s commentary. He manages to use eloquent prose that comforts and inspires, despite the depressing subject matter. He makes sense of the news to his readers while simultaneously demanding more action of them. When something newsworthy happens—almost every day at the rate that Trump tweets—I seek Dan Rather's take. (More here and here on Rather discovering social media and launching News and Guts.)

I started What Unites Us today. And it feels fitting to post a little something from it now because Doug Jones just won the senate seat in Alabama!!!! First Democrat elected to the seat in 25 years. Defeating racist pedophile Roy Moore. In a very tight race. Largely due to African Americans, and black women especially. (Oh, the poetic justice of Selma turning the tide of the race.) And the brave women who came forward to the Washington Post about Moore's history of sexual assault. The future feels a little brighter tonight! I cannot WAIT to vote in next year’s midterm elections.

"If I were to plot on a map my countless flight paths criscrossing the United States, it would look like a thread stitching our great union together."
("Night Flights," p. 2)

“Patriotism—active, constructive patriotism—takes work. It takes knowledge, engagement with those who are different from you, and fairness in law and opportunity. It takes coming together for good causes. This is one of the things I cherish most about the United States: We are a nation not only of dreamers, but also of fixers. We have looked at our land and people, and said, time and time again, “This is not good enough; we can be better.”
(p. 17)

“Like so many, I love my country and its people. I do so with a sentimentality that may seem anachronistic in today’s more jaded world. I have been known to get emotional when I talk about “the land of the free and the home of the brave.” But to me these words mean something very deep, a feeling I struggle to put into words. They aren’t just the lyrics before the umpire yells, “Play ball!” From battlefields to segregated lunch counters, I have seen the cost of freedom and bravery. It is high. Our nation will not survive was we know it without an engaged and committed population. We cannot wait for others to fix what is broken, and I am inspired to see a new generation of grassroots activists rise up to insist that the cause of justice is expressed broadly across America. Our founding documents contain some of the most beautiful and noble words ever put on paper. I recite them often and love them with every fiber of my being. “We the people,” all of us, are living together in perhaps the greatest social and governmental experiment ever conceived. We are being tested. How can we prepare ourselves for this moment? Are we up to the challenge?” (pp. 17-18)
Posted by Noelia de la Cruz at 11:56 PM

Email ThisBlogThis!Share to TwitterShare to FacebookShare to Pinterest
Labels: Dan Rather, election, Elliot Kirschner, patriotism, politics, reflections on patriotism, What Unites Us