In truth, a library is as much a portal as it is a place—it is a transit point, a passage. 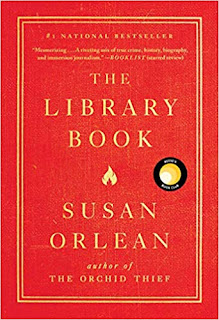 The Library Book
By Susan Orlean

This book lacked so much focus and editing that it's hard to embrace it 100%.* But it also enriched my knowledge of library history and captured the essence of the public library as a place for everyone in a community. I have fond childhood memories of visiting my own local library, located a few blocks away from home. We didn't have a lot of money to spend on books, so the library was godsend and I remember the excitement of circling the small space searching for the maximum number of books (25) to check out at once. In later years, the same library employed my teenaged brother.  (Still thankful for this.) Today, I continue to view the library as a reliable sanctuary and often utilize it as such.

Painful to think of all the text that has been lost over the years as a result of human cruelty and ego. Let's please not forget this history.
"In the saga of humankind, most things are done for money—arson especially—but there is no money to be made by burning libraries. Instead, libraries are usually burned because they contain ideas that someone finds problematic. In the thirteenth and fourteenth centuries, the pope ordered Jewish books to be collected and "cremated" (the choice of terms at the time) because he believed they spread anti-Catholic thought. The Spanish Inquisition introduced the idea of book-burning festivals, which were community gatherings around bonfires made of "heretical" books, including any written in Hebrew, especially the Torah.
The Spanish continued their book burning abroad. In the mid-1500's, Hernan Cortes and his soldiers burned scores of Aztec manuscripts on the grounds that they contained black magic. After Cortes's victory, a priest named Diego de Landa was assigned to inflict Catholicism on the Mayan people. De Landa was fascinated by Mayan culture, yet he oversaw the torture and murder of scores of Mayans, and he burned every Mayan book and image he found. Only a few codices are known to have survived De Landa's purge, and those are among the only remaining documents of the Mayan civilization."
(p. 97)

"You could fill a book with the list of lost libraries of the world, and in fact, there have been many books written about them, including one with the haunting title Libricide, written by a professor of library science. Early in history, when there were fewer books, and printing copies were expensive and time-consuming, the loss of a library could be terminal. UNESCO released studies in 1949 and in 1996 listing all the libraries that have been demolished throughout modern history. The number of books destroyed, by UNESCO's count, is so enormous—in the billions—that I sometimes find it hard to believe there are any books left in the world.
War is the greatest slayer of libraries. Some of the loss is incidental. Because libraries are usually in the center of cities, they are often damaged when cities are attacked. Other times, though, libraries are specific targets. World War II destroyed more books and libraries than any event in human history. The Nazis alone destroyed an estimated hundred million books during their twelve years in power. Book burning was, as author George Orwell remarked, "the most characteristic [Nazi] activity.""
(pp. 97-8)

"The grinding destruction of the war crushed the libraries of Europe. Some were merely unlucky and got caught in fire bombings and aerial attacks meant for more strategic targets. But the German army singled out books for destruction. Special book-burning squads known as "Brenn-Kommandos" were sent out to burn libraries and synagogues. The squads were effective. Enumerating the losses of libraries in the war, both incidental and purposeful, is dizzying. Twenty major libraries containing two million books were destroyed in Italy. France lost millions more, including 300,000 in Strasbourg, 42,000 in Beauvais, 23,000 in Chartres, and 110,000 in Douai. The Library of the National Assembly in Paris burned down, taking with it countless historic arts and science books. In Metz, officials hid the library's most valuable books in an unmarked warehouse for safekeeping. A German soldier found the warehouse and threw an incendiary device into it. Most of the books, including rare eleventh- and thirteenth-century manuscripts were destroyed. During the Blitz, twenty million books in Great Britain burned or were wrecked by the water used to extinguish the fires. The Central Lending Library in Liverpool was completely ruined. (The rest of the city's libraries stayed open throughout the Blitz, maintaining regular hours and levying the usual overdue fines.)
After the 1938 Munich Conference , every book in the Czech language that dealt with geography, biography, or history was confiscated and either burned or mashed into pulp. In Vilnius, Lithuania, the library in the Jewish ghetto was set on fire. A few months later, the residents of the ghetto were shipped to concentration camps and gassed, illustrating the truth in German poet Heinrich Heine's warning: "There were one burns books, one in the end burns men." In Budapest, all small libraries and at least part of every major one was destroyed. Belgium's huge Library of the University of Louvain suffered more than almost any library in Europe. In World War I, the German army had burned it down. After the Armistice, a consortium of European nations rebuilt the library, and it reopened to great celebration. In 1940, the library was hit by German artillery fire, and all of the books in its stack were lost, including Old Masters prints and almost one thousand books published before 1500. In Poland, eighty percent of all books in the country were destroyed. In Kiev, German soldiers paved the streets with reference books from the city's library to provide footing for their armored vehicles in the mud. The troops then set the city's libraries on fire, burning four million books. As they made their way across Russia, the troops burned an estimated ninety-six million more.
The Allies' bombing of city centers in Japan and Germany inevitably hit libraries. Theodore Welch, who studies libraries in Japan, has written that by the time the American army arrived in 1945, three quarters of all the books in the country's libraries had been burned or damaged. The losses in Germany were astonishing. Most of the library books in cities including Bremen, Aachen, Stuttgart, Leipzig, Dresden, Munich Hanover, Munster, and Hamburg were incinerated. Three quarters of a million were destroyed in Darmstadt; more than a million in Frankfurt; two million in Berlin. By the end of the war, more than one third of all the books in Germany were gone."
(pp. 99-101)

Her anecdotes by way of her "immersion journalism" are some of my favorites, and in particular the ones that demonstrate how librarians, who go above and beyond to help patrons, are true civil servants. Reminded me of my past experience serving customers at a high-end pawn shop (for real) and managing consumer affairs at HBO fielding strange questions. At the time, it felt excruciating, but the experience is valuable, frustrating, surprising, enlightening, and, in retrospect, always entertaining.

"We get a lot of repeat callers," said David Brenner, who was at the desk next to Princenthal's. "We have an older gentleman who calls regularly with questions about mythology, science fiction, World War I, that sort of thing. He also always asks about a few actresses and celebrities, asking me if I know what's going on with them. Actually, he asks about Juliette Lewis and the women in Pussy Riot."
The librarian beside Brenner, Harry Noles, said, "Oh, and there's that guy who calls every few months to get updates on Dana Delany, the actress from that show China Beach."
Princenthal hung up her phone and wrote something down. "Sometimes I'm amazed by what people call about," she said, tapping her desk with a pencil. "Once, a patron called to ask if it was okay for her to eat a can of beans that didn't have an expiration date. I mean, there is a website called Still Tasty that I use to check expiration dates on things, but I'm not going to take responsibility for a lady eating a can of beans!"
(p. 232)


*This tweet by Susan reminded me of another issue I struggled with while reading this book: her description of people. Definitely noticed she would only identify African Americans. She also generally uses weird descriptors frequently ("busty" is one that comes to mind). Anyway, it's a positive she has taken the constructive criticism well and will be more conscious of her habits in future work.
Posted by Noelia de la Cruz at 8:52 AM