Everybody wants somebody to hold up the right mirror. 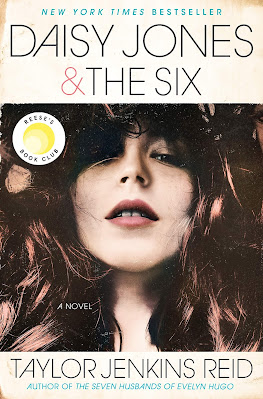 Daisy Jones & The Six
By Taylor Jenkins Reid
There are now two books I'd recommend listening to on audio over reading—Their Eyes Were Watching God (narrated by Ruby Dee) and Daisy Jones & The Six narrated by a full cast of talented, perfectly-voiced actors.
Perfect for the long weekend, I loved the experience of blindly getting immersed in this one, written like an oral history (my favorite)—of being hit with nostalgia, and sentimentality and coming-of-age Almost Famous-y music storytelling goodness. I only wished real tunes accompanied the great lyrics she wrote for the tale. Reid's writing has heart and I look forward to reading more.
"Billy: Teddy told me once, "What your sound is, is a feeling. That's it. And that's a world above everything else."
I remember saying "What's the feeling?"
I was writing about love. I was singing with a little bit of a growl. We were rockin' hard on the guitars with some real blue bass lines. So I was thinking Teddy might say, you know, "taking a girl home from a bar" or "speeding with the top down," or something like that. Something fun, maybe, and a little dangerous.
But he just said, "It's ineffable. If I could define it, I wouldn't have any use for it."
That really stuck with me."
("Debut" - p. 55)
"Daisy: ... I was sitting in the living room of my cottage, looking out the window, my songbook in my lap, realizing that if I didn't start trying—I mean being willing to squeeze out my own blood, sweat, and tears for what I wanted—I'd never be anything, never matter much to anybody.
I called Teddy a few days later, I said, "I'll record your album. I'll do it."
And he said, "It's your album." And I realized he was right. The album didn't have to be exactly my way for it to still be mine."
("First"" - pp. 80-1)
"Billy: She was great at wordplay. She was great at flipping the meaning of things, of undercutting sentiment. I loved that about what she was doing and I told her that.
Daisy: The harder I worked as a songwriter, the longer I worked at it, the better I got. Not in any linear way, really. More like zigzags. But I was getting better, getting really good. And I knew that. I knew that when I showed the song to him. But knowing you're good can only take you so far. At some point, you need someone else to see it, too. Appreciation from people you admire changes how you see yourself. And Billy saw me the way I wanted to be seen. There is nothing more powerful than that. I really believe that. Everybody wants somebody to hold up the right mirror."
("Aurora" - p. 201)
Posted by Noelia de la Cruz at 9:59 PM