As it ravished me, I longed for a freeze-frame 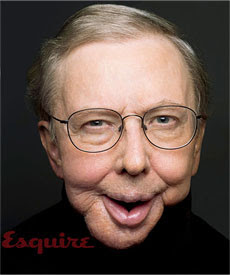 For this, I'm going to leave Roger Ebert's words and not Chris Jones'. It shows that despite everything that's happened to him, his essence is still there. And he can still write. I was never too familiar with Ebert - though looking at previous photos I do remember seeing him occasionally on TV - but this article got a lot of buzz so I read it and it moved me.

"Pedro Almodovar loves the movies with lust and abandon and the skill of an experienced lover. "Broken Embraces" is a voluptuary of a film, drunk on primary colors, caressing Penelope Cruz, using the devices of a Hitchcock to distract us with surfaces while the sinister uncoils beneath. As it ravished me, I longed for a freeze-frame to allow me to savor a shot."
Posted by Noelia de la Cruz at 11:29 AM