And so, when opened up by the knife, the meat dried out immediately 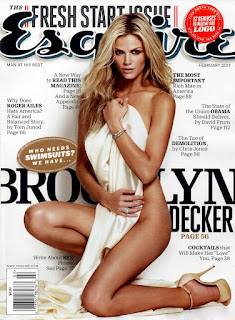 Esquire, February 2011
Brooklyn Decker Lightens the Burden of Living in This World by Tom Chiarella
I read the first few grafs and thought to myself, "I get that this is a men's magazine, and ok, yeah, Brooklyn Decker is gorgeous, but why does she get a whole article devoted to her?!?! There is literally nothing to Brooklyn Decker but her physical appearance." Voiced my opinion, to which my wise friend responded, "Maybe that's the point." Ah, yes. By the end, I found the story to be quite amusing. Below excerpt possibly a metaphor for Brooklyn?
"But it isn't the truth. The chicken was good when it came out of the oven. Just fine, juicy--piquant, even. Nice touch with the prosciutto, Brooklyn. But it was too hot, and so, when opened up by the knife, the meat dried out immediately. The salad couldn't save it. By the time she asked, the chicken really was quite a chore."
Tom Chiarella, you so smart.
PS, I can't believe she's only two years older than me.
Posted by Noelia de la Cruz at 4:14 PM