Everything in life, all the faces of life, were piling into the same dank room. 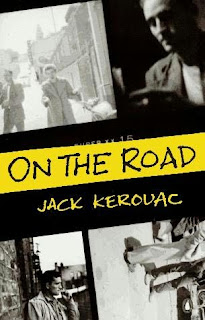 On Wednesday I decided to search showtimes for On The Road and found it played in only one theater in the city, the IFC theater, and that the next night was the last night it would show. So! I won't be seeing it anytime soon. I also heard it sucks, which is a bummer because it's such a fantastic novel.

Anyway. More excerpts. My favorite thing about this novel is the myriad of characters Sal Paradise encounters and hangs with. Sal himself is not an extraordinary or interesting person, but he's a writer and feels the need to surround himself with people who are.

"The strange thing was that next door to Remi lived a Negro called Mr. Snow whose laugh, I swear on the Bible, was positively and finally the one greatest laugh in all this world. This Mr. Snow began to laugh from the supper table when his old wife said something casual; he got up, apparently choking, leaned on the wall, looked up to heaven, and started; he staggered through the door, leaning on neighbor's walls; he was drunk with it, he reeled throughout Mill City in the shadows, raising his whooping triumphant call to the demon god that must have prodded him to do it. I don't know if he ever finished supper. There's a possibility that Remi, without knowing it, was picking up from this amazing man, Mr. Snow. And though Remi was having worklife problems and bad lovelife with a sharp-tongued woman, he at least learned to laugh almost better than anyone in the world, and I saw all the fun we were going to have in Frisco." (p. 57)

"Soon it got dusk, a grapy dusk, a purple dusk over tangerine groves and long melon fields; the sun the color of pressed grapes, slashed with burgundy red, the fields the color of love and Spanish mysteries." (p. 73)

"The snow whirled outside. A big party was on hand in New York; we were all going. Dean packed his broken trunk, put it in the car, and we all took off for the big night. My aunt was happy with the thought that my brother would be visiting her the following week; she sat with her paper and waited for the midnight New Year's Eve broadcast from Times Square. We roared into New York, swerving on ice. I was never scared when Dean drove; he could handle a car under any circumstances. The radio had been fixed and now he had wild bop to urge us along the night. I didn't know where all this was leading; I didn't care." (p. 115)

"The parties were enormous; there were at least a hundred people at a basement apartment in the West Nineties. People overflowed into the cellar compartments near the furnace. Something was going on in every corner, on every bed and every couch–not an orgy but just a New Year's party with frantic screaming and wild radio music. There was even a Chinese girl. Dean ran like Groucho Marx from group to group, digging everybody. Periodically we rushed out to the car to pick up more people. Damion came. Damion is the hero of my New York gang, as Dean is the chief hero of the Western. They immediately took a dislike to each other. Damion's girl suddenly socked Damion on the jaw with a roundhouse right. He stood reeling. She carried him home. Some of our mad newspaper friends came in from the office with bottles. There was a tremendous and wonderful snowstorm going on outside. Ed Dunkel met Lucille's sister and disappeared with her; I forgot to say that Ed Dunkel is a very smooth man with the women. He's six foot four, mild, affable, agreeable, bland, and delightful. He helps women on with their coats. That's the way to do things. At five o'clock in the morning we were all rushing through the backyard of a tenement and climbing in through a window of an apartment where a huge party was going on. At dawn we were back at Tom Saybrook's. People were drawing pictures and drinking stale beer. I slept on a couch with a girl called Mona in my arms. Great groups filed in from the old Columbia Campus bar. Everything in life, all the faces of life, were piling into the same dank room." (p. 117)

"There was a strange quiet in the apartment. I went and tapped Dean and told him to go to Marylou; and I retired to the couch. I could hear Dean, blissful and blabbering and frantically rocking. Only a guy who's spent five years in jail can go to such maniacal helpless extremes; beseeching at the portals of the soft source, mad with a completely physical realization of the origins of life-bliss; blindly seeking to return the way he came. This is the result of years looking at sexy pictures behind bars; looking at the legs and breasts of women in popular magazines; evaluating the hardness of the steel halls and the softness of the woman who is not there. Prison is where you promise yourself the right to live. Dean had never seen his mother's face. Every new girl, every new wife, every new child was an addition to his bleak impoverishment. Where was his father?–old bum Dean Moriarty the Tinsmith, riding freights, working as a scullion in the railroad cookshacks, stumbling, down-crashing in wino alley nights, expiring on coal piles, dropping his yellowed teeth one by one in the gutters of the West. Dean had every right to die the sweet deaths of complete love of his Marylou. I didn't want to interfere. I just wanted to follow." (p. 123)

"His relation with his wife was one of the strangest; they talked till late at night; Bull liked to hold the floor, he went right on in his dreary monotonous voice, she tried to break in, she never could; at dawn he got tired and then Jane talked and he listened, snuffing and going thfump down his nose. She loved that man madly, but in a delirious way of some kind; there was never any mooching and mincing around just talk and a very deep companionship that none of us would ever be able to fathom. Something curiously unsympathetic and cold between them was really a form of humor by which they communicated their own set of subtle vibrations. Love is all; Jane was never more than ten feet away from Bull and never missed a word he said, and he spoke in a very low voice, too." (p. 136)

"I felt sweet, swinging bliss, like a big shot of heroin in the mainline vein; like a gulp of wine late in the afternoon and it makes you shudder; my feet tingled. I thought I was going to die the very next moment. But I didn't die, and walked four miles and picked up ten long butts and took them back to Marylou's hotel room and poured their tobacco in my old pipe and lit up. I was too young to know what had happened. In the window I smelled all the food of San Francisco. There were seafood places out there where the buns were hot, and the baskets were good enough to eat too; where the menus themselves were soft with foody esculence as though dipped in hot broths and roasted dry and good enough to eat too. Just show me the bluefish spangle on a seafood menu and I'd eat it; let me smell the drawn butter and lobster claws. There were places where they specialized in thick red roast beef au jus, or roast chicken basted in wine. There were places where hamburgs sizzled on grills and the coffee was only a nickel. And oh, that pan-fried chow mein flavored air that blew into my room from Chinatown, vying with the spaghetti sauces of North Beach, the soft-shell crab of Fisherman's Wharf–nay, the ribs of Fillmore turning on spits! Throw in the Market Street with chili beans, redhot, and french-fried potatoes of the Embarcadero wino night, and steamed clams from Sausalito across the bay, and that's my ah-dream of San Francisco." (p. 163)

Email ThisBlogThis!Share to TwitterShare to FacebookShare to Pinterest
Labels: Jack Kerouac, On The Road