"They developed two remarkable inventions--agriculture and antibiotics--some fifty million years before people did." 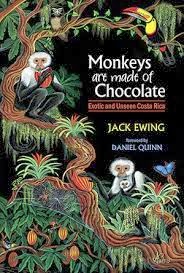 Monkeys Are Made of Chocolate
By Jack Ewing

Excerpts from the chapter about leaf-cutter ants because I saw these cool creatures in action on my trip during a night walk in a Monteverde rainforest. It was awesome:

"An average leaf-cutter colony with approximately five million ants is from 3 to 6 meters (10 to 20 feet) deep. Digging and moving the amount of earth necessary to create such a colony is a colossal task comparable to the building of the pyramids in ancient Egypt. One researcher measured and weighed the dirt that the ants had excavated and piled into a mound on top of their average-size colony. The leaf-cutter ants had, over a period of about five years, carried to the surface 22 cubic meters (29 cubic yards) of earth weighing over 30 tons -- about two large dump truck loads.
The shaft exits in the mound are always situated so that rain will drain away from the openings. The principal ant entrances are located away from the mound of dirt, usually lower. In order to create air flow and control the humidity and temperature, the ants pile all their refuse, including dead ant bodies, unused leaves and other useless organic matter, in large chambers near the bottom of the city. As it decomposes, this material heats up and raises the temperature of the surrounding air, which then rises through the labyrinth of tunnels leading to the top of the mound. The rising air creates a draft which draws in fresh air from over 1,000 vents. The temperature and humidity of the chambers will vary according to their distance from the hot air flow. The fungus is cultivated in chambers which are located where optimum conditions exist." (p. 41)

"All the members of the colony contribute directly or indirectly to the cultivation of the fungus. The most obvious of the seven distinct castes of Atta cephalots are the leaf carriers marching through the forest with their green parasol-like cargo.* When they arrive at the colony and deposit their leaf crescents, another caste takes over: the cleaners. Each leaf fragment is meticulously scraped and licked until clean. Later it is cut into smaller pieces, chewed, mixed with saliva and formed into a soft wad. The ants then place some fungus starter material, called mycelia, on the medium and place it beside other newly planted fungus in a suitable chamber.
From that point another caste, the fungus caretakers, step in and take over the process. These ants are responsible for keeping the fungus clean and free from impurities and infection. They do this partially by physically removing any foreign life form that tries to grow on either the medium or the bread-like fungus. But they have a few other tricks up their sleeves. A recent article in the New York Times entitled "Ants, Mushrooms and Mold: An Evolutionary Arms Race" by Nicholas Wade, tells us that the leaf-cutter fungus has long been plagued by a mold that is capable of wiping out the entire food supply of the colony in just a couple of days. However, the ants have an ally who helps them combat this enemy. A bacterium that lives in a patch on the ant's skin produces an antibiotic that controls the mold. In Wade's words, referring to the leaf-cutters: "They developed two remarkable inventions--agriculture and antibiotics--some fifty million years before people did. Beyond that, they have learned how to handle technologies more skillfully than the bumbling civilization above their heads. They can grow a monoculture--a genetically homogeneous crop, something that in human hands generally leads to disasters like the Irish potato famine--and they have also learned how to deploy an antibiotic without the target pest's becoming resistant to it."" (p.42-3)