It didn't matter what key or tempo or what melody, they would keep on playing through their discordance until they found a common language. 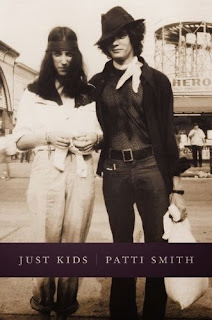 "I was always hungry. I metabolized my food quickly. Robert could go without eating much longer than me. If we were out of money we just didn't eat. Robert might be able to function, even if he got a little shaky, but I would feel like I was going to pass out. One drizzly afternoon I had a hankering for one of those cheese-and-lettuce sandwiches. I went through our belongings and found exactly fifty-five cents, slipped on my gray trench coat and Mayakovsky cap, and headed to the Automat.
I got my tray and slipped in my coins but the window wouldn't open. I tried again without luck and then I noticed the price had gone up to sixty-five cents. I was disappointed, to say the least, when I heard a voice say, "Can I help?"
I turned around and it was Allen Ginsberg. We had never met but there was no mistaking the face of one of our great poets and activists. I looked into those intense dark eyes punctuated by his dark curly beard and just nodded. Allen added the extra dime and also stood me to a cup of coffee. I wordlessly followed him to his table, and then plowed into the sandwich.
Allen introduced himself. He was talking about Walt Whitman and I mentioned I was raised near Camden, where Whitman was buried, when he leaned forward and looked at me intently. "Are you a girl? he asked.
"Yeah," I said. "Is that a problem?"
He just laughed. "I'm sorry. I took you for a very pretty boy."
I got the picture immediately.
"Well, does this mean I return the sandwich?"
"No, enjoy it. It was my mistake."
He told me he was writing a long elegy for Jack Keruoac, who had recently passed away. "Three days after Rimbaud's birthday," I said. I shook his hand and we parted company.
Sometime later Allen became my good friend and teacher. We often reminisced about our first encounter and he once asked how I would describe how we met. "I would say you fed me when I was hungry," I told him. And he did."
(pp. 122-123)

"I was excited to go. I put on my straw hat and walked downtown, but when I got there, I couldn't bring myself to go in. By chance, Jimi Hendrix came up the stairs and found me sitting there like some hick wallflower and grinned. He had to catch a plane to London to do the Isle of Wight Festival. When I told him I was too chicken to go in, he laughed softly and said that contrary to what people might think, he was shy, and parties made him nervous. He spent a little time with me on the stairs and told me his vision of what he wanted to do with the studio. He dreamed of amassing musicians from all over the world in Woodstock and they would sit in a field in a circle and play and play. It didn't matter what key or tempo or what melody, they would keep on playing through their discordance until they found a common language. Eventually they would record this abstract universal language of music in his new studio.
"The language of peace. You dig?" I did.
I can't remember if I actually went into the studio, but Jimi never accomplished his dream. In September I went with my sister and Annie to Paris. Sandy Daley had an airline connection and helped us get cheap tickets. Paris had already changed in a year, as had I. It seemed as if the whole of the world was slowly being stripped of innocence. Or maybe I was seeing a little too clearly.
As we walked down the boulevard Montparnasse I saw a headline that filled me with sorrow: Jimi Hendrix est mort. 27 ans. I knew what the words meant.
Jimi Hendrix would never have the chance to return to Woodstock to create a universal language. He would never again record at Electric Lady. I felt that we had all lost a friend. I pictured his back, the embroidered vest, and his long legs as he went up the stairs and out into the world for the last time."
(pp. 168-170)

"Janis spent most of the party with a good-looking guy she was attracted to, but just before closing time he ducked out with one of the prettier hangers-on. Janis was devastated. "This always happens to me, man. Just another night alone," she sobbed on Bobby's shoulder.
Bobby asked me to get her to the Chelsea and to keep an eye on her. I took Janis back to her room, and sat with her while she bemoaned her fate. Before I left, I told her that I'd made a little song for her, and sang it to her.