It is the nature of some things to remain locked away for the simple reason that revealing them serves no earthly purpose. 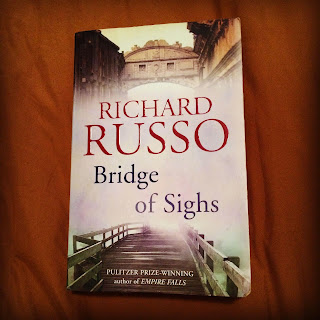 Bridge of Sighs
By Richard Russo

Oh, this book made me feeeel. My friend knows me so well. More on those feelings another time.

"It is the nature of some things, I believe, to remain locked away for the simple reason that revealing them serves no earthly purpose. For instance, I've never told anyone, even Sarah, what my father confided to me when he was ill. I've wanted to. His secret has weighed heavily on me, especially these last few years. I tell myself that he didn't mean I shouldn't tell Sarah, whom he loved and whose kind heart he trusted. But his instructions were "Don't tell nobody," and so I haven't. I've told no one that when my father entered the voting booth each Election Day, he stayed there for as long as he judged it would take to complete a ballot, then returned his to its protective sleeve, unmarked. Unable or unwilling to follow my mother's advice, he wasn't confident enough of his own conclusions to act on them. He felt the burden of democratic responsibility and believed that decisions of such magnitude should not rest with men like him. Because he was a proud American, he knew he had the right to vote. But he also knew he had the right not to, and he exercised both of these rights each Election Day.
Have I kept this secret so long because I'm ashamed of him, as my mother would've been if she'd known? Or because it would break Sarah's heart to hear it? Or because it broke my own, to know that he considered voting to be something for my mother, and later for me, but not for him? I don't know, but his secret is mine to keep, and so I will. I am not Buddy Nurt. I don't mine humiliation for gold. That said, what then can be the point of telling my story? Why scan the past for the shapes and meanings it surrenders so reluctantly if you mean to suppress some and exaggerate others?
But is the living of life so different from the telling of it? Do we not, a hundred times a day, decide not to bear witness? Do we not deny and suppress even at the level of instinct?"
(pp. 218-9)

"Is it any wonder our adult lives should be so haunted? Over and over we go up and down the alley between the theater and the dime store, as my mother and I did today, moving through space, yes, but also through time, meeting ourselves, as Owen always says, coming and going."
(p. 220)
Posted by Noelia de la Cruz at 7:09 AM