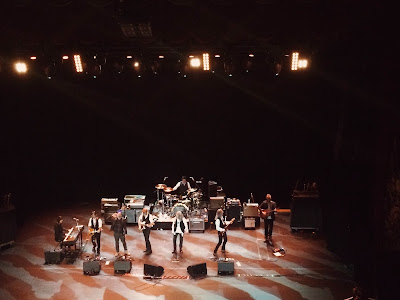 I meant to post this photo taken at The Beacon Theatre on 11/10 sooner, but it felt weird to post about anything at the end of that week in light of the tragedy in Paris, and then I forgot.

A few months after I finished reading Just Kids, tickets went on sale for Patti Smith's Horses 40th anniversary tour. I had no idea -- just absolute perfect timing. I jumped on tickets because my admiration for Just Kids was still very fresh and I wanted to experience Patti's energy live. Plus I didn't know when I might be able to again.

I felt like more of a bystander, observing the way the older people around me were immersed in music they've long been familiar with. I smiled when the elder man two rows ahead of me would raise his fists or signal peace with his two fingers every time he felt especially moved by the beat or lyric of a song. I wondered if he had seen Patti before, and if he had maybe seen her 40 years before, and if it was in New York, and what that must have been like: to see her at the very beginning. Patti Smith is still a fucking rock star in every sense of the word & if I can sing and dance and scream and move the way she does at the age of nearly-70, I'll be a very happy woman.
Posted by Noelia de la Cruz at 9:49 AM