We all remember the parts of the past that allow us to meet the future. 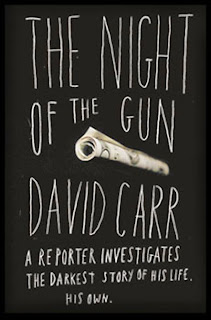 The Night of The Gun
By David Carr

Zipped through this one without ever writing a page number or notation--that's how engrossed I found myself--but I skimmed through to find the passages that lingered with me days after.

David Carr will be dead one year next month. These passages of course don't encapsulate the memoir: his drug and alcohol addiction, raising his two twin daughters, his journalism career(s). I am so impressed by his ability to delve so deeply into the fog & pull out the truest version he could of his life. I knew him best for his work at The New York Times, and am saddened he's no longer here.

Memory is a theme I'm drawn to time and time again:

"Shakespeare describes memory as the warder of the brain, but it is also its courtesan. We all remember the parts of the past that allow us to meet the future. The prototypes of the lie--white, grievous, practical--make themselves known when memory is called to answer. Memory usually answers back with bullshit. Everyone likes a good story, especially the one who is telling it, and the historical facts are generally sullied in the process. All men mean well, and clearly most people who set out to tell the truth do not lie on purpose. How is it, then, that every warm bar stool contains a hero, a star of his own epic, who is the sum of his amazing stories?"
(p. 23)

"Memory is the one part of the brain's capacity that seems to be able to bring time to heel, make it pause for examination, and, in many cases, be reconfigured to suit the needs of that new moment. Long before TiVo, humans have been prone to selecting, editing, and fast-forwarding the highlights of their lives. Even if every good intention is on hand, it is difficult if not impossible to convey the emotional content of past events because of their ineffability. Even in an arch me-as-told-to-me paradigm, the past recedes, inexorably supplanted by the present.
Memory remains an act of perception, albeit perception dulled by time, but it is also about making a little movie. Remembering is an affirmative act--recalling those events that made you you is saying who you are. I am not this book, but this book is me.
Episodic and semantic memory each lie in different ways, but each is eventually deployed in service of completing a story. Stories are how we explain ourselves to each other with the remorseless truth always somewhere between the lines of what is told. In this way, memory becomes not a faculty but a coconspirator, a tool for constructing the self that we show the world."
(p. 183)

All words can be meaningful:

"Eden House was brimming with slogans. This was the main one: "The answer to life is learning to live." We would say that, loudly and with a great deal of emotion, at the conclusion of each group meeting.
This is the point where the knowing, irony-infused author laughs along with his readers about his time among the aphorisms, how he was once so gullible and needy that he drank deeply of such weak and fruity Kool-Aid. That's some other book. Slogans saved my life. All of them--the dumb ones, the preachy ones, the imperatives, the cliches, the injunctives, the gooey, Godly ones, the shameless, witless ones.
I lustily chanted some of those slogans and lived by others. There is nothing ironic about being a crackhead and a drunk, or recovery from same. Low-bottom addiction is its own burlesque, a theater of the absurd that needs no snarky annotation. Unless a person is willing to be terminally, frantically earnest, all hope is lost."
(pp. 192-3)

Because I love love & when people unabashedly express it***:

"Everything right about her was wrong for me. I had generally gone out with women who had a lot of dark hair falling into their faces, bee-stung lips, and remarkable leather jackets, with more tattoos than jewelry. As my friend Eddie once observed, "The women you date don't just look bitchy. They are." This Danish-Icelandic-Norwegian-Irish girl had worked in the U.S. Senate for a Republican, had her own house in South Minneapolis, and was just coming off a sales job and getting ready to go to grad school to become a teacher. Not. My. Type.
My kind, though."
(p. 312)

"When I moved to New York, I asked my pal Amanda how she thought I'd like it. "It's a fight. And if you want the fight, it's great. And if you don't want the fight, it sucks."
I liked the fight. Unlike Washington and Los Angeles, where people rise and fall based on some secret chart, New York is a place where the wiring diagram is very visible and fundamentally, oddly, just. If you are good at what you do, work hard, and don't back down, you can make a place to stand on the island.
The trick of enjoying New York is not to be so busy grinding your way to the center of the earth that you fail to notice the sparkle of the place, a scale and a kind of wonder that put all human endeavors in their proper place."
(pp. 336-7)

"I now inhabit a life I don't deserve, but we all walk this earth feeling we are frauds. The trick is to be grateful and hope the caper doesn't end any time soon."
(p. 382)


***In ways that are not cheesy or corny, but poetic and true.