Stop running the milk train. Do the work of turning toward home. 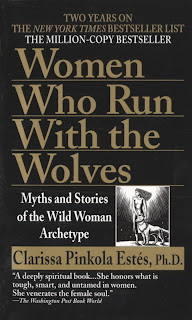 I lost my first copy of Women who Run on the way back from Montreal; I suspect I left it on the plane even though I don't remember taking it out of my bag. I like to think it found its way into the hands of someone who needed it. The only loss: my notes on favorite passages between chapters three and nine.

Homing: Returning to OneSelf

"There is human time and there is wild time. When I was a child in the north woods, before I learned there were four seasons to a year, I thought there were dozens: the time of night-time thunderstorms, heal lightning time, bonfires-in-the-woods time, blood-on-the-snow time, the times of ice trees, bowing trees, crying trees, shimmering trees, bearded trees, waving-at-the-tops-only trees, and trees-drop-their-babies time. I loved the seasons of diamond snow, steaming snow, squeaking snow, and even dirty snow and stone snow, for these meant the time of flower blossoms on the river was coming.
These season were like important and holy visitors and each sent its harbingers: pine cones open, pine cones closed, the smell of leaf rot, the smell of rain coming, crackling hair, lank hair, bushy har, doors  loose, doors tight, doors that won't shut at all, windowpanes covered with ice-hair, windowpanes covered with wet petals, windowpanes covered with yellow pollen, windowpanes pecked with sap gum. And our own skin had its cycles too: parched, sweaty, gritty, sunburned, soft.
The psyches and souls of women also have their own cycles and seasons of doing and solitude, running and staying, being involved and being removed, questing and resting, creating and incubating, being of the world and returning to the soul-place. When we are children and young girls, the instinctive nature notices all these phases and cycles. It hovers quite near us and we are aware and active at various intervals as we see fit.
Children are the wildest nature, and without being told to, they prepare for the coming of these times, greeting them, living with them, and keeping from those times recuerdos, mementos, for remembering: the crimson leaf in the dictionary; the angel-wing necklaces from the seeds of the silver maples; snowballs in the meat locker; the special stone, bone, stick, or pod; the peculiar shell; the ribbon from the bird burial; a diary of smells from that time; the calm heart; the excited blood; and all the pictures in their minds.
Once, we lived by these cycles and seasons year after year, and they lived in us. They calmed us, danced us, shook us, reassured us, made us learn creaturally. They were part of our soul-skins—a pelt that enveloped us and the wild and natural world—at least until we were told that there really were only four seasons to a year, and that women themselves really only had three seasons—girlhood, adulthood, and old womanhood. And that was supposed to be that.
But we cannot allow ourselves to sleepwalk wrapped in this flimsy and unobservant fabrication, for it causes women to deviate from their natural and soulful cycles and therefore to suffer from dryness, tiredness, and homesickness. It is far better for us to return to our own unique and soulful cycles regularly, all of them, any of them."
(pp. 276-7)

"The pelt in this story is not so much an article as the representation of a feeling state and a state of being—one that is cohesive, soulful, and of the wildish female nature. When a woman is in this state, she feels entirely in and of herself instead of out of herself and wondering if she is doing right, acting right, thinking well. Though this state of being "in one's self" is one she occasionally loses touch with, the time she has previously spent there sustains her while she is about her work in the world. The return to the wildish state periodically is what replenishes  her psychic reserves for her projects, family, relationships, and creative life in the topside world."
(p. 286)

"Every creature on earth returns to home. It is ironic that we have made wildlife refuges for ibis, pelican, egret, wolf, crane, deer, mouse, moose, and bear, but not for ourselves in the places where we live day after day. We understand that the loss of habitat is the most disastrous event that can occur to a free creature. We fervently point out how other creatures' natural territories have become surrounded by cities, ranches, highways, noise, and other dissonance, as though we are not surrounded by the same, as though we are not affected also. We know that for creatures to live on, they must at least from time to time have a home place, a place where they feel both protected and free."
(p. 287)

"The aggravated theft of the sealskin also occurs far more subtly through the theft of a woman's resources and of her time. The world is lonely for comfort, and for the hips and breasts of women. It calls out in a thousand-handed, million-voiced way, waving to us, plucking and pulling at us, asking for our attention. Sometimes it seems that everywhere we turn there is someone or a something of the world that needs, wants, wishes. Some of the people, issues, and things of the world are appealing and charming; others may be demanding and angry; and yet others seem so heartrendingly helpless that, against our wills, our empathy overflows, our milk runs down our bellies. But unless it is a life-and-death matter, take the time, make the time, to "put on the brass brassiere." Stop running the milk train. Do the work of turning toward home.
Though we see that the skin can be lost through a devastating and wrong love, it may also be lost in a right and deepest love. It is not exactly the rightness of a person or thing or its wrongness that causes the theft of our sealskins, it is the cost of these things to us."
(p. 288)

yes to all of these things. Ocean spume!
"Although there are many physical places one can go to "feel" her way back to this special home, the physical place itself is not home; it is only the vehicle that rocks the ego to sleep so that we can go the rest of the way by ourselves. The vehicles through and by which women reach home are many: music, art, forest, ocean spume, sunrise, solitude. These take us home to a nutritive inner world that has ideas, order, and sustenance all of its own."
(p. 307)

Just before this, she references Adrienne Rich's Diving into the Wreck.
"The most important thing I can tell you about the timing of the home cycle is this: When it's time, it's time. Even if you're not ready, even if things are undone, even if today your ship is coming in. When it's time, it's time. The seal woman returns to the sea, not because she just feels like it, not because today is a good day to go, not because her life is all nice and tidy—there is no nice and tidy time for anyone, She goes because it's time, and therefore she must."
(p. 308)

"In order to converse with the wild feminine, a woman must temporarily leave the world and inhabit a state of aloneness in the oldest sense of the word. Long ago the word alone was treated as two words, all one. To be all one meant to be wholly one, to be in oneness, either essentially or temporarily. That is precisely the goal of solitude, to be all one."
(p. 316)

"For myself, solitude is rather like a folded-up forest that I carry with me everywhere and unfurl around myself when I have need. I sit at the feet of the great old trees of my childhood. From that vantage point, I ask my questions, receive my answers, then coalesce my woodland back down to the size of a love note till next time. The experience is immediate, brief, informative."
(p. 317)