She brings not only light, but fire.

AOC: The Fearless Rise and Powerful Resonance of Alexandria Ocasio-Cortez
Edited by Lynda Lopez
Alexandria inspires me, as she has so many others, to be more, to do more, to fight, to be informed, to be brave, to clap back when necessary, to wear my hoops and red lipstick boldly, to speak my flawed Spanish shamelessly, and on and on. Enjoyed reading these impassioned tributes to her and recognizing myself as part of a collective of strong women [and supportive men] who have been called to action by her light and fire.

"It's this very possibility that's exhilarating for some, chilling for others: that women, and in this case, progressive women of color, newly elected in historic numbers, might team up in defense of one another, come to each other's aid, exact political revenge on those who would vanquish their allies in ways they have never been capable of before. Because it's not that women in the past haven't had the will or desire to respond to the affront of having been stepped over by powerful men; it's that they have not had the numbers, the voice or the chutzpah that comes with those things until very, very recently. What's scary to so many about Ocasio-Cortez is that she's acting like a politician with power."
(pp. 69-70)

"What I couldn't have known is that my Spanish was never fated to be perfect. How could it be, when English was the main vehicle through which I consumed everything? It was the language of my friends, my teachers, my textbooks, and the movies, TV shows, songs, and stories I loved...But when you speak you first language only at home, it becomes your second. It becomes the carrier of all things domestic, its development stunted like a grown child who never makes it out on their own. Which is why, the first time I heard AOC speak Spanish on national television, I experienced pride, horror, shame, joy, and relief all in the time it took her to form one sentence."
(p. 72)
"To deal with the shame of hearing my own flawed Spanish come out of someone else's mouth, I first reached for the cheapest of coping mechanisms, comparing and critiquing AOC's fluency. How easily we perpetuate internalized harm, especially if we've never stopped to interrogate its roots."
(p. 73)
"If language is power, then my Spanish, flawed as it may be, has served its purpose by allowing me to help others."
(p. 80)
"I've watched the video of AOC on Univision 5, 10, 15 times. It occurs to me that I've been leaving myself out of too many conversations out of fear, and I think maybe if I watch her closely enough, I'll learn how to speak Spanish with more confidence.
In it, there's no room for AOC to overthink or rehearse her answers, and even more impressively: it doesn't matter. When she approaches someone on a sidewalk to talk about the 2020 census, they respond to her warmth and passion, not her grammar. When Tejeda asks about her favorite food and AOC says, "Mofongo, soy puertorriqueña," the two Latinas laugh in mutual celebration of their community.
There's no challenge to her identity, no doubt cast over her worth. Her Spanish is not flawed, it is simply honest, a more true representation of what it can mean to be first-gen Latinx in the United States today. Rooted in one place and now grounded in another, we find we are constantly translating, journeying back and forth. We find that our language, and the stories it carries, is not a straight path. Not necessarily English or "proper" Spanish or even Spanglish. Not the right words or the wrong words, either.
Here, in the conversations that those like AOC are creating, we don't need to apologize for our language. We have the words we learned at home, the ones we know by heart. They are good enough, powerful enough. They will be heard."
(pp. 82-3)

The Center Will Not Hold. Alexandria Ocasio-Cortez is Counting On It by Erin Aubrey Kaplan

"Ocasio-Cortez made us remember who we are because of who she is: she's not simply a person worthy of being elected—bright, informed, empathetic, people oriented. She comprises all the demographics we need to see more of in government right now: female, Latina, of color, young, concerned about climate change and all the other big, paralyzing crises that have piled up over years and are bearing down on all of us, whatever our demographic. In the version of the near future that puts America on a fast train to ruin, unwilling or unable to break the momentum of any big crises, she is a road sign that says: turn here. Ocasio-Cortez brings not only light, but fire."
(pp. 85-6)

Latinas Are So Money by Carmen Rita Wong

"The power she has is twofold: (1) She has the confidence of conviction. She understands that money and economic policies shape our lives in this country, particularly the lives of people of color. (2) Her knowledge of the system is the fuel she uses to push ahead through the pile-on of dudes dismissing her at every turn."
(p. 113)
"...This is about understanding how revolutionary it is to have someone who looks like us, who shares our history and our expansive underrepresented culture, speaking to power. And money—boring, scary money—is key to leveling the playing field. AOC knows that. Now millions more of us are getting to know and see that, too."
(p. 120)
P.S. I voted early today and felt powerful, hopeful, and brave.
& an update from my journal on Election Day: "Strangely (or not) I feel as I did four years ago: very hopeful. The whiplash of emotions after Hillary lost stunned us all into silence at first and then action in ensuing weeks. I know the risk of the same outcome is very much alive, but still I feel hopeful." 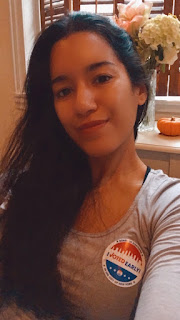