Through all times the moon has endured out there, pale and distant, determining the tides and tugging at the heart, a symbol, a beacon, a goal. 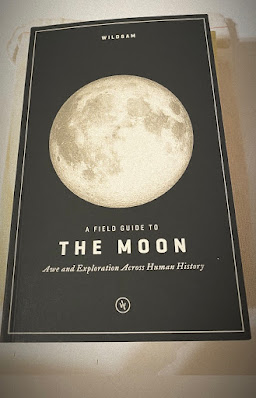 Full, bright, beautiful moon tonight. Last night, too. She's just gorgeous and perennially guides me out of my head and tides me in to the present.

(Fun fact: it is the first full moon on Halloween visible across all U.S. timezones since 1944.)

I purchased the Wildsam Field Guide to the Moon in the early days of the pandemic and relished in this love letter to the moon and cosmos.

I loved too that it was inclusive of all perspectives and gave space to both the wonder of space exploration and its superfluousness when compared to the plights of marginalized Black people on Earth. Both of these passages are so equally human and valid in their despair and hope.

Landing an astronaut on the moon has more priority in America than putting a black man on his feet, in a job, or a poor family on a decent diet. This space accomplishment at a cost of billions of dollars will receive coast to coast acclaim and international attention.
But as a black Washington correspondent, I see this week as a crucial period in history. There will be headlines and hours of radio and television time on the day to day activity. President Nixon invited the president of his alma mater, Whittier College, to speak at the White House religious service on "the Meaning of The Man on The Moon." Meanwhile what of the man in the street—in poverty stricken Appalachia, Watts, and Harlem. He wished the astronauts well and marvels at their courage.
But he also wonders if the powers of science and technology will ever focus in such a fashion on his problems. Thanks to modern communications, even the simplest ghetto dweller knows that the American space program and its counterpart in the Soviet Union are almost as political in their motives as they are scientific.
And while the victims of poverty watch the space race with awe, we wonder how long it will be before the synopsis of a moon flight wears off and the victims of poverty realize that they are still hungry. Perhaps the presence of the mule train of the Poor People's Campaign at Cape Kennedy will remind some people that their NASA tax dollars might best be spent in other ways.
Sometime, somehow, we Americans—and the Russians as well—must think about making the earth a better place to live. To escape to the moon is no answer for any of us—black, white, brown or yellow.

"Well, man's dream and a nation's pledge have now been fulfilled. The lunar age has begun. And with it, mankind's march outward into that endless sky from this small planet circling an insignificant star in a minor solar system on the fringe of a seemingly infinite universe. The path ahead will be long; it's gong to be arduous; it's going to be pretty doggone costly. We may hope, but we should not believe, in the excitement of today, that the next trip or the ones to follow are going to be particularly easy. But we have begun with 'a small step for a man, a giant leap for mankind,' in Armstrong's unforgettable words. In these eight days of the Apollo II mission the world was witness to not only the triumph of technology, but to the strength of man's resolve and the persistence of his imagination. Through all times the moon has endured out there, pale and distant, determining the tides and tugging at the heart, a symbol, a beacon, a goal. Now man has prevailed. He's landed on the moon, he's stabbed into its crust; he's stolen some of its soil to bring back in a tiny treasure ship to perhaps unlock some of its secrets. The date's now indelible. It's going to be remembered as long as man survives—July 20, 1969—the day a man reached and walked on the moon. The least of us is improved by the things done by the best of us. Armstrong, Aldrin and Collins are the best of us, and they've led us further and higher than we ever imagined we were likely to go."