The good thing about passion is that it pushes us forward and keeps us committed and young. 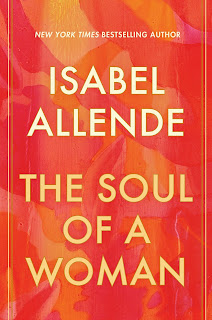 The Soul of a Woman: On Impatient Love, Long Life, and Good Witches
By Isabel Allende
Could talk endlessly about passions.
"We have talked about sexual passion and romantic passion. But what does it mean simply to be passionate? According to the dictionary, it's a disorderly mood disturbance; it is also described as a powerful and irresistible emotion that can lead to obsessive or dangerous actions.
My own definition is less somber. Passion is unbridled enthusiasm, exuberant energy, and determined devotion to someone or something. The good thing about passion is that it pushes us forward and keeps us committed and young. I have been training for years to be a passionate old woman, just as others train to climb mountains or play chess. I don't want to allow caution, so often prevalent in later years, to destroy my passion for life.
Almost all the female protagonists of my books are passionate because they are the people who interest me. I want characters capable of committing obsessive and dangerous actions, as the dictionary says. A safe and quiet life is not good material for fiction.
I have sometimes been described as a passionate person because I never sat quietly in my house, as was expected of me. I have to clarify that my risky endeavors were motivated not always by a passionate temperament but because circumstances threw me in unexpected directions. I did the best I could. I have lived in a rough sea where waves would lift me and then drop me to the bottom. This surge has been so strong that before, when things went well, I would prepare for a violent fall, which I considered inevitable, instead of relaxing in the tranquility of the moment. Now it's not like that. Now I drift along day after day, happy to just float for as long as possible."
(pp. 65-6)
"Carmen was my mentor and my friend. She used to say that we were not friends; I was her client and she was my agent, that we only had a business relationship, but that was not true at all. (Nor was her proclamation that she would have liked to be a kept woman. I can't imagine anybody less gifted for that role than she.) Carmen was at my side during my most significant moments, from Paula's illness to family weddings to my divorces, always supporting me unconditionally, always present.
This woman, who was able to confront the biggest bully, consulted an astrologer; she believed in psychics, gurus, and magic. She would easily get emotional and cry. She cried so much that Gabriel Garcia Marquez dedicated one of his books to her: To Carmen Balcells, bathed in tears.
She was generous to an extreme. For my mother's eightieth birthday, she sent eighty white roses all the way to Chile, and when Uncle Ramon turned ninety-nine she did the same for him. She never forgot his birthday because they were born the same day in August. Once she gave me a complete set of Louis Vuitton luggage because she considered mine cheap and old. It was stolen at the airport in Caracas the first and only time I used it, but I didn't tell her because she would have replaced it immediately. She would send me so many chocolates that I still find some hidden in the most unexpected corners of my house.
After the sudden death of this formidable Catalan lady, I had the feeling for a while that I had lost the life vest that kept me afloat in the stormy literary sea. But the agency she created with her talent and vision continues smoothly under the management of her son, Louis Miguel Palomares.
I have Carmen's photograph on my desk to remind me of her advice: Anybody can write a good first book, but a writer is proved by the second and by those that follow; you are going to be judged harshly because success in women is not easily forgiven; write what you want; don't allow anybody to interfere with your work or in the handling of your money; treat your children like royalty, they deserve it; get married, because a husband, no matter if he is a moron, looks good...
After I had published twenty books, which have been translated into forty-something languages, a Chilean writer whose name I don't remember said that I was not a writer, I was a typist. Carmen Balcells asked him if he had formed his opinion based on having read any of my work. His reply: "Over my dead body." This was when I was nominated for the National Prize for Literature.
In 2010, with the support of four former presidents, several political parties, and Congress, I received the award. Only then did I finally win some respect from Chilean critics. Carmen sent me ten pounds of orange peels covered in dark chocolate, my favorite."
(pp. 72-4)