History often emerges only in retrospect. 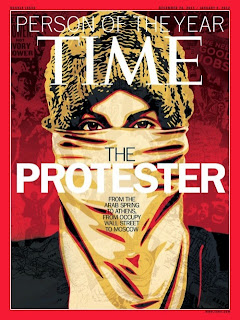 TIME did an excellent job of encompassing the crazy, eventful, tumultuous year 2011 has been in its "Person of the Year" issue. The person: the protester. Great infographics in the front of book that feature some of the year's most viral images, buzzwords (i.e. "occupy" and "planking"), best tweets, things of the year (i.e. percentage 99% and the 7th billion person born), how forces of nature have affected the world, and so on. It seriously blows my mind when I think of all that has happened. The cover story of protesters around the world features powerful portraits and words from some of the people who fought this year for their freedoms and beliefs. Also includes short profiles of Admiral William McRaven (led the Osama bin Laden raid), Chinese activist Ai Weiwei, Paul Ryan, and Kate Middleton. Finally, a farewell to some prominent people who died this year (Steve Jobs, Elizabeth Taylor, Gil Scott-Heron, Betty Ford, Joe Frazier, etc). Concludes with a Joel Stein piece about Ryan Gosling (<3!).

"History often emerges only in retrospect. Events become significant only when looked back on. No one could have known that when a Tunisian fruit vendor set himself on fire in a public square in a town barely on a map, he would spark protests that would bring down dictators in Tunisia, Egypt and Libya and rattle regimes in Syria, Yemen and Bahrain. Or that that spirit of dissent would spur Mexicans to rise up against the terror of drug cartels, Greeks to march against unaccountable leaders, Americans to occupy public spaces to protest income inequality, and Russians to marshal themselves against a corrupt autocracy. Protests have now occurred in countries whose populations total at least 3 billion people, and the word protest has appeared in newspapers and online exponentially more this past year than at any other time in history.
Is there a global tipping point for frustration? Everywhere, it seems, people said they'd had enough. They dissented; they demanded; they did not despair, even when the answers came back in a cloud of tear gas or a hail of bullets. They literally embodied the idea that individual action can bring collective, colossal change. And although it was understood differently in different places, the idea of democracy was present in every gathering. The root of the word democracy is demos, "the people," and the meaning of democracy is "the people rule." And they did, if not at the ballot box, then in the streets. America is a nation conceived in protest, and protest is in some ways the source code for democracy — and evidence of the lack of it.
The protests have marked the rise of a new generation. In Egypt 60% of the population is under the age of 25. Technology mattered, but this was not a technological revolution. Social networks did not cause these movements, but they kept them alive and connected. Technology allowed us to watch, and it spread the virus of protest, but this was not a wired revolution; it was a human one, of hearts and minds, the oldest technology of all.
Everywhere this year, people have complained about the failure of traditional leadership and the fecklessness of institutions. Politicians cannot look beyond the next election, and they refuse to make hard choices. That's one reason we did not select an individual this year. But leadership has come from the bottom of the pyramid, not the top. For capturing and highlighting a global sense of restless promise, for upending governments and conventional wisdom, for combining the oldest of techniques with the newest of technologies to shine a light on human dignity and, finally, for steering the planet on a more democratic though sometimes more dangerous path for the 21st century, the Protester is TIME's 2011 Person of the Year. -- Rick Stengel"

Email ThisBlogThis!Share to TwitterShare to FacebookShare to Pinterest
Labels: 2011, Person of the year, protester, TIME