"I don't want to blow shit up. I want to get stuff done." 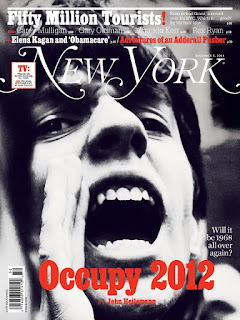 "In such an environment, formal claims to leadership are invariably and forcefully rejected, leaving the processes for accomplishing anything in a state of near chaos, while at the same time opening the door to (indeed compelling) ad hoc reins-taking by those with the force of personality to gain ratification for their deas about how to proceed. "In reality," says Yotam Marom, one of the key OWS organizers, "movements like this are most conducive to being led by people already most conditioned to lead.""

"Capitalizing on this support is the central issue facing OWS, and its ability to do so will depend on myriad factors, including the behavior of plutocrats, politicians, and police. (In terms of presenting shocking and morally clarifying imagery, the recent pepper-spraying incident at the University of California, Davis, struck many as reminiscent of Bull Connor's goons dousing civil-rights protesters with fire hoses in 1963). But it will also depend on which of two broad strains within OWS turns out to be dominant: the radical reformism of social democrats such as Berger, who want to see a more humane and egalitarian form of capitalism and a government less corrupted by money, or the radical utopianism of the movement's anarchists and Marxists, who seek to replace our current economic and political arrangements with ... who knows what? "My fear is that we become the worst of the New Left," Berger says. "I don't want to live in a fucking commune. I don't want to blow shit up. I want to get stuff done.""

"Teichberg is a 39-year-old Russian immigrant with stooped shoulders and a mop of brown hair who grew up in Rego Park and is so jacked in to the electronic grid that he comes across like a character out of Neuromancer. But what makes him so interesting is that you could just as easily imagine him making a cameo in The Big Short. A math prodigy who was a Westinghouse Science Talent Search finalist before matriculating at Princeton, he left college (temporarily) after his sophomore year and went to work for Bankers Trust, the first in a string of Wall Street gigs at firms including Deutsche Bank, Swiss Reinsurance Corp., and HSBC. And what did he do in those places? He created, modeled, and traded derivatives, including some of the first synthetic CDOs. And he told the London Times, he was "one of the people [who] built that bomb that blew up the whole economy.""

"Like Teichberg's, their criticisms of that system are more sophisticated and precise than those of many of their comrades. But their politics, also like Teichberg's, are the opposite: earnest and idealistic, for sure, but also vague and half-formed."

I could never quite align myself with the Occupy Wall Street movement, and I can't quite articulate why; I don't know why. One might think I might be a little more sympathetic (I have less than $1,000 to my name, about $25,000 in debt, no job, living with a single mother who got laid off a few months ago...). At the same time though, I'm really confident in my potential to succeed in the career I've chosen, I have an awesome internship, I'm optimistic that my mom will find a job soon, I'm lucky enough to be able to live at home in NYC. I don't quite feel screwed over by the system just yet. I don't know. I also met a lot of the protesters; interns headed down there in September to help with polling, and I don't know, I just wasn't impressed. I didn't get the idea many of them knew what they were talking about. Anyway, I liked that John Heilemann evaluated how this movement can and whether it will, influence politics next year. And especially loved that he spoke to some of the more intelligent leaders (though the movement claims to be leaderless) who have identified some of the problems I've had with the movement and their ideas on how to improve it and make it effective. And it's not that I don't think there aren't fundamental things that need to change. I just never thought camping out in a park and yelling was the best way to address the problem. I think they (we?) have to be smarter about our approaches if we want to make any real differences ... meh, that's all I have to say about it for now.
Posted by Noelia de la Cruz at 7:04 PM