The hothouse brand of American malice stalks our country still. 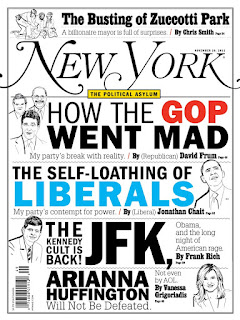 What Killed JFK, by Frank Rich

"What's also clear is that, despite the ardent attempts of the Kennedy cult to keep his romantic image alive, it is fading among those Americans who are too young to have witnessed it firsthand, in Technicolor. They tend to see JFK now as the property of their parents and grandparents--a short, transitional chapter in the American story, gradually reverting to black-and-white. Listen to Jackie Kennedy in her conversations with Schlesinger--with her feathery voice and piquant observations bespeaking a vanished time and class--and it's hard to imagine what any 21st-century American under 40 could possibly make of her patrician eccentricities. In retrospect, that exhilarating rally at American University in Washington, D.C., in January 2008--where Caroline Kennedy, her uncle Teddy, and her cousin Patrick, soon to end the family's 64-year run in national office, passed the torch to Obama--was the dynasty's last hurrah.

On the other hand, read Manchester or 11/22/63 or any other account of that time, and the vitriol that was aimed at Kennedy in life seems as immediate as today. It's as startling as that "You lie!" piercing the solemnity of a presidential address like a gunshot--or the actual gunshots fired at the White House last week by another wretched waif. In the end, that political backdrop is what our 44th and 35th presidents may have most in common. The tragedy of the Kennedy cult is that even as it fades, the hothouse brand of American malice that stalked its hero stalks our country still."

This issue is packed with good stuff. Just look to the cover. Especially "When Did the GOP Lose Touch With Reality?" by David Frum and "When Did Liberals Become So Unreasonable?" by Jonathan Chait. The piece about Bloomberg's personal conflict with Occupy Wall Street. The design story, too. The juice-bar spread (the photo is perfect). And can't forget "He Shops She Shops," particularly the part with the senior couple, Leo and Tillie! Fuck it, here is the table of contents.
Posted by Noelia de la Cruz at 9:51 PM