After the slow introduction, the violins unfurl a gently swelling theme, made piquant by syncopations. 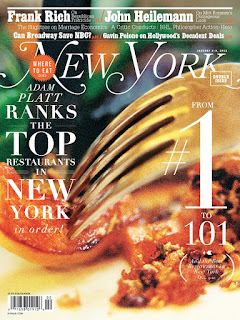 Adam Platt's list is cool, but I can't afford to dine at any of the places listed so I skimmed. But Justin Davidson's What Does A Conductor Do? is wonderfully written and provides great insight to an underrated, difficult profession.

"I have been wondering what, exactly, a conductor does since around 1980, when I led a JVC boom box in a phenomenal performance of Beethoven's Seventh Symphony in my bedroom. I was bewitched by the music--the poignant plod of the second movement, the crazed gallop of the fourth--and fascinated by the sorcery. In college, I took a conducting course, presided over a few performances of my own compositions, and led the pit orchestra for a modern-dance program. Those crumbs of experience left me in awe of the constellation of skills and talents required of a conductor--and also made me somewhat skeptical that waving a stick creates a coherent interpretation."

"I've chosen the Don Giovanni overture because it distills almost everything I adore in music: darkness, humor, violent emotions elegantly expressed, the subtle play of human interactions. In the opera, virtually every conversation is an argument. The Don bickers with his complaining servant Leporello, fends off the grasping Donna Elvira, humiliates the peasant Masetto, and seduces the young bride Zerlina. Mozart weaves this banter into the overture, developing a rhetoric of interruptions and contradictions. After the slow introduction, the violins unfurl a gently swelling theme, made piquant by syncopations. The phrase breaks off in mid-thought and skitters impishly back down for a couple of measures before being interrupted by fanfare full of bravado. Mozart, the showbiz professional, has introduced three moods, personalities, and styles in eight bars, all with seamless charm. How to translate this into movement? Will I just wind up exaggerating the contrasts with silly pantomime?"

"As I get deeper into the score, I focus on one crucial but difficult aspect of the job: preparing a moment before it arrives. Gilbert urges his students to stop living in the moment; giving a Get ready! cue just one beat head of a Now! creates a little shiver of panic. A conductor has to be simultaneously ahead of the music and with it, experiencing and expecting at the same time--manufacturing an extended déjà vu. When Gilbert works, you can see the pulse thrumming through his body, diggadiggadiggadiggadigga, yet he also projects a commanding serenity."

"In Italian, the word maestro also means teacher. As we power toward the final cadence and I exchange glance after glance with the young musicians, it occurs to me that they are bombarding me with unspoken questions and it's my job to convey answers. That's what a conductor does: mold an interpretation by filtering the thousands of decisions packed into every minute of symphonic music. The clarinetist inclined to add a little gleam to a brief solo by slowing down slightly, the tuba player preparing a fortissimo blast after twenty minutes of nothing--each will look to the podium for a split-second shot of guidance, and the conductor who meets those fleeting inquiries with clarity and assurance will get a more nuanced performance. My efforts haven't made me a good conductor, or even a mediocre one, but they have given me the glimmerings of competence--an intoxicating taste of what it might feel like to realize the fantasy of my boom-box days."

Amazing.
Posted by Noelia de la Cruz at 9:45 AM