Always stay humble. It's the only way you can't get humiliated. 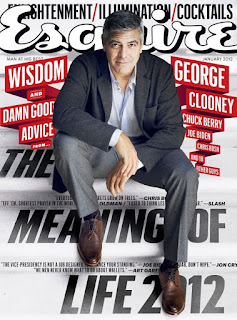 Meaning of Life, my fave! Personally, I liked last year's better, overall. But there's good stuff in this one too. And it's a good theme ("the other guys" sans George Clooney). A few:

George Clooney
"There's ten of us, we've been best friends for thirty years. Ten guys. And their wives, and their kids, are all family now. I'm not big on keeping up on the phone, none of us are. Some guys I won't talk to for two months and then you pick up the phone and hear, "So, anyway." There's no guilt or where have you been? or what's been going on? or why haven't we talked? There's an ease to it.
I remember when Richard Kind's dad suddenly died. This was about seven or eight years ago--maybe more. Richard's a really wonderful character actor. He loved his dad, and he was very grown-up about passing on the news. He called and left a message: My dad died, I'm in Chicago, the funeral's going to be in New Jersey tomorrow morning. I'll talk to you when I get back. This was five o'clock at night. I was in L.A. Rick is a Jew. They bury the next day. They don't screw around. They get you right in the ground. So I called up Michael, Grant's brother, and told him Richard's dad died. He said, "We should be there." The guys were all around the country. One was in Denver. One was in San Diego.
So I got a jet and we spent the whole night flying around the country. San Diego, Denver. We landed in Trenton, New Jersey. Richard didn't know anything about it.
We got to the synagogue, this giant synagogue, with the people up front. And Richard didn't know we were going to be there. We're sitting there, the nine of us in the back row. And Richard gets up to speak about his dad and he sees his nine best friends there. And what I loved about it was that all of us understood that there are moments in your life that are real passages. Your father dying is a very big one. Because you are now the man of the family. We understood how important that was at that time."

Joe Biden
"My dad used to say, "You know you're a success when you look at your kids and realize they turned out better than you." I am a success. But I should have had one Republican who wanted to be an investment banker and make a lot of money so that when they put me in a home, I get a window with a view."

Vanna White
"People don't know the real you unless you tell them."

Jon Cryer
"Critics can say horrible things. It only hurts when I agree with them."

Scottie Pippen ; Really liked this one, hard to pinpoint one quote, you've got to read 'em all together. It starts with:
"The first NBA game I ever saw in person was the one I played in."

Charlie Murphy
"I was sitting in this mogul's house. My brother was there, and they were having lunch. It was real nice, going down to the beach and everything. And then we see this woman walking on the beach. It's Diana Ross. I ran down there and got her. So now we're sitting in this room. Diana Ross is sitting with Eddie in the mogul's section. I'm with some common folk on the other side. We're talking, having fun. One guy happens to use the f word. And Diana Ross comes all the way across the room and says, "Excuse me, I don't know who you gentlemen are, but I don't tolerate any profanity in my vicinity." Now, we're not at Diana Ross's house. We're in another house. We don't work for her. That's what we were all thinking. And one guy goes, "Fuck you, Diana." She was stunned. Her face, it looked like pieces of it were falling off. No one was sorry. Because what sticks out in this story for me is: Why are people kissing Diana Ross's ass? Is she God? No. She sang on some records and did a good job! I give her her props. But that doesn't make you more of an adult than me. That doesn't give you any more rights than me. Being your fan is optional. If you forget that, because everybody's been blowing sunshine up your ass, you're putting yourself in the position to take a fall. That's the moral of the story. Always stay humble. It's the only way you can't get humiliated."

"For me, it was an instant. The first night I met Tisha was on a boat. She was having dinner with her friends. She didn't know who I was, and I asked her to come with me. Her friends told her not to go. But she did. We drove straight to my brother's house. My mother was there. My stepfather was there. Eddie was there. They were all in the kitchen. I walked in and said, "This is my future wife."

"We fit. I don't believe that you can meet another person that fits just like that. She wasn't even another person. She's a mirror, you know what I mean. It was like that for twenty years."

"I come home and she's in the kids' room, crying. That's when she told me. Cervical cancer. You don't really grasp it. When the person tells you they're going to die, you go crazy. You become a different person from the moment you hear those words. A young woman like that--don't drink, don't smoke, don't do drugs. I know people that's ninety who do all of that. She's a very organized woman. When she died, all the arrangements had been made. She made her own arrangements."

Allison Janney
"I got to know Paul Newman. I played ping-pong with him. He once told me, "If you ever need a favor, let me know." I never called him on that favor. I used to carry his favor around in my pocket like it was a Valium. Just knowing I had it in my pocket made me feel really confident."

"We joke in my family that my father learned to play the piano so he wouldn't have to talk to anybody. I wish I could play the way he did so I could go to parties and be present but not have to be called upon for small talk. Everybody loves the person playing the piano."

Slash
"I used to think Les Paul was a guitar. I didn't know he was a real guy. When I got to know him, I found out that if you're really obsessed, he was the guy you'd want to be like. He was always trying to find an answer for what he was looking for in his mind."

"It's not something you can find. There's a moment you arrive at--there's no words for it. A bunch of people come together at this place where a note hits your heart and your brain tells your finger where to go. It's an otherworldly thing, like when a painter gets the right combination of colors together."
Posted by Noelia de la Cruz at 11:46 AM