Almost instantaneously, the boys of the Tabarre neighborhood of Port-au-Prince fell madly in love with America's pastime. 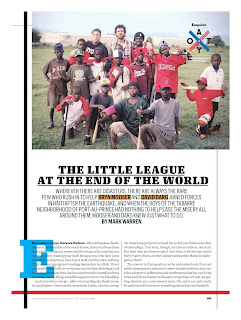 The Little League at the End of the World by Mark Warren
Esquire, December 2012

Another great 'Americans of the Year' story about two volunteers who started a baseball league in Haiti after the 2010 earthquake. Extremely heartbreaking and heartwarming.

When your day job has you immersed in extreme poverty and death, you need relief, no matter how strong you are. In addition to building the schools and the water systems, both Mooser and Darg also helped an American priest, Father Rick Frechette, run the crematorium on the day of the week devoted to unclaimed bodies. But as meaningful as they found the work, unrelieved bleakness makes the soul sick. So when the hectoring boys set upon them, they decided to engage them, because is anything more full of life than a ten-year-old boy? They wanted to do something for these boys in the evenings, something organized, to best channel their energies.

"They said they wanted to play soccer, so we got them a ball and tried to organize a game, but they were all so malnourished that after five minutes they were listless, just sitting on the field, having lost interest completely," Darg says. "This was going to be a bigger challenge than we thought. We wondered: What game do boys love that doesn't require as much energy as soccer? Baseball."

Having grown up mostly abroad, neither Mooser nor Darg knew much about baseball other than the basics, but that was enough. A couple of random balls and bats had arrived in a container, and they managed to scrounge up some gloves from somewhere. They began meeting evenings with the neighborhood strays, all of whom had lost their homes, all of whom had lost some if not all of their families. And almost instantaneously, the boys of the Tabarre neighborhood of Port-au-Prince fell madly in love with America's pastime. And just as instantaneously, baseball practice became Mooser and Darg's favorite time of day, a bright beam of life at the edge of all the death. In no time, the lethargy from the soccer pitch was gone. Practices happened most weekdays, and with every practice came a meal that Mooser and Darg paid for out-of-pocket. They'd had no intention of starting an actual team, much less a Little League, but before long the Tabarre Tigers were born, followed by two other teams. Leading the Tigers was a rambunctious assortment of characters, including one kid in a wheelchair who somehow managed to swing a bat anyway.

It is a bizarre fact of life that across the island, the Dominican Republic produces 10 percent of the players in the major leagues, while it wasn't long ago that most baseballs were manufactured in Haiti, where the sport is unknown. "We had this crazy idea," says Darg, "that we'd get these boys playing really well, then we'd go find a team in the D.R. and kick its ass."
Posted by Noelia de la Cruz at 1:49 PM