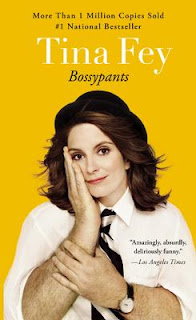 I just finished. Can I blog the entire book as an excerpt?

No? OK. I'm going with two more -- the first about her father and the second about her best friend Amy Poehler. There are so many good ones, though, and honestly I can't even remember where they are exactly -- excerpts about her start at SNL, 30 Rock, breaking stereotypes about women in the workplace, growing up, being Sarah Palin, her honeymoon, her daughter. I didn't write the page numbers down the way I usually do because I was reading it all too fast.

How can I give her what Don Fey gave me? The gift of anxiety. The fear of getting in trouble. The knowledge that while you are loved, you are not above the law. The Worldwide Parental Anxiety System is failing if this many of us have made sex tapes ... Don Fey is from the Silent Generation. They are different from their children. They cannot be "marketed to." They don't feel "loyalty" to Barnes and Noble over Borders. If you told Don Fey that you never go to Burger King only McDonald's, because you "grew up with the Hamburglar," he would look at you like you were a moron.
When my face was slashed, my dad held me on his lap in the car to the hospital, applying direct pressure with the swift calm of a veteran and an ex-fireman. I looked up and asked him, "Am I going to die?" "Don't speak," he said. So, yeah, he's not the kind of guy who wants to watch people eat bugs on Survivor. It's so clear to me how those two things are related.
My dad has visited me at work over the years, and I've noticed that powerful men react to him in a weird way. They "stand down." The first time Lorne Michaels met my dad, he said afterward, "Your father is...impressive." They meet Don Fey and it rearranges something in their brain about me. Alec Baldwin took a long look at him and gave him a firm handshake. "This is your dad, huh?" What are they realizing? I wonder. That they'd better never mess with me, or Don Fey will yell at them? That I have high expectations for the men in my life because I have a strong father figure?
Only Colin Quinn was direct about it. "Your father doesn't fucking play games. You would never come home with a shamrock tattoo in that house."
That's Don Fey.
(pp. 53-5)

Amy Poehler was new to SNL and we were all crowded into the seventeenth-floor writers' room, waiting for the Wednesday read-through to start. There were always a lot of noisy "comedy bits" going on in that room. Amy was in the middle of some such nonsense with Seth Meyers across the table, and she did something vulgar as a joke. I can't remember what it was exactly, except it was dirty and loud and "unladylike."
Jimmy Fallon, who was arguably the star of the show at the time, turned to her and in a faux-squeamish voice said, "Stop that! It's not cute! I don't like it."
Amy dropped what she was doing, went black in the eyes for a second, and wheeled around on him. "I don't fucking care if you like it." Jimmy was visibly startled. Amy went right back to enjoying her ridiculous bit. (I should make it clear that Jimmy and Amy are very good friends and there was never any real beef between them. Insert penis joke here.)
With that exchange, a cosmic shift took place. Amy made it clear that she wasn't there to be cute. She wasn't there to play wives and girlfriends in the boys' scenes. She was there to do what she wanted to do and she did not fucking care if you like it.
I was so happy. Weirdly, I remember thinking, "My friend is here! My friend is here!" Even though things had been going great for me at the show, with Amy there, I felt less alone.
(pp. 143-4)
Posted by Noelia de la Cruz at 10:27 PM