The invisible ace that Land held in his pocket was an understanding of his audience. 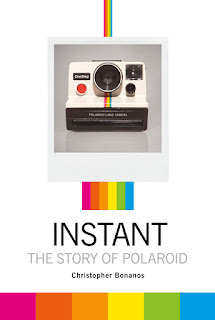 Instant: The Story of Polaroid
By Christopher Bonanos

On my last, or one of my last, days as an intern at New York magazine, I stopped by Chris Bonanos' office. I was working on a project with him and art critic Jerry Saltz and I stopped by to give him an update on my research and to tell him I would no longer be interning there. Not sure how it happened but the conversation quickly led to Polaroid and the book he was writing about the revolutionary company. I ended up speaking to him for about half hour, maybe more -- whereas during the course of my internship we had exchanged only a few words -- as he divulged some of the fascinating things he learned while writing his book. He was super passionate about the project and I left his office feeling inspired; I couldn't wait for the book to come out. It did, in September, but I didn't read it until now.

Instant is wonderful; it explores Polaroid and founder Edwin Land's scientific, technological, and cultural impacts. As the story goes, Land was on vacation with his family when his young daughter asked, "Why can't I see the picture now?" after he snapped her photo. Within days, he had laid the groundwork to the instant camera's development. Within months, he had a camera. Land's curiosity, intelligence, and extreme work ethic led to the creation of a product most consumers didn't know they wanted but enthusiastically embraced. Polaroid was Apple before Apple; Edwin Land was one of Steve Jobs' idols. Surprisingly, digital was the company's downfall and Bonanos explains why. Recently, a few have stepped up to save the company and Polaroid is kind of seeing a mini-comeback -- or at the very least, staving off its complete extinction.

Bonanos showed me an image Land took of himself just as he was revealing his invention to the world. It's the one he's holding in the photo below. A lot counted on the image successfully appearing and you can see his apprehension in the shot. Bonanos describes that moment: 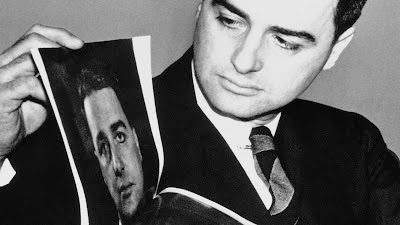 The invisible ace that Land held in his pocket was an understanding of his audience. The seated members of the Society were certainly going to find his invention interesting -- they were engineers and scientists. But the guys in the back of the room, newspaper and magazine photographers and reporters, had the real power, and they were another matter. Imagine what a 1940s newspaper photographer did every day. He went out, got his shots, and then hauled himself back to the office on deadline, whereupon the gnomes in the darkroom processed what he'd shot. If what he'd done was overexposed, underexposed, or otherwise lousy, he'd get a tongue-lashing from the photo desk. If only he could see it right away.

Land began speaking and setting up his demonstration, gradually taking his place in front of the view camera. He fired the shutter with a cable release, taking a picture of his own face. He had just exposed a big negative inside the camera, much as the guys in the press pool were doing with their beat-up Speed Graphics. A moment later, Otto Wolff, who was working with Land, pulled the negative out of the camera, in the process joining it face to face with a sheet of glossy photo paper.

Between the two sheets, at one end of the picture, lay one of the principal Polaroid inventions: the pod. Relative to its importance, it looked like nothing special: a slim foil packet, as wide as the photo, containing perhaps an ounce of thick chemical reagent; almost everyone at Polaroid called the contents "goo." Once the multilayer paper sandwich came out of the camera, it was run between two precisely made steel rollers, bursting the pod and spreading its contents smoothly between the film and paper. The goo stood in for a darkroom's baths of wet chemistry, and there was just enough of it that the print came out nearly dry. It had taken a lot of effort to get the pod right. It had to break open and spread its contents the same way every single time, which meant that it had to be precisely filled and sealed.
Wolff and Land switched on the motor driving the rollers, and fed the photo through, breaking the pod open and starting development. "Fifty seconds," Land told the room, and set a timer. As Peter Wensberg tells the story, Land was terrified that it would fail in front of the reporters, and in the photos of the event, he does seem a little less confident than was his usual mien. He had bet his company and the livelihood of his remaining employees on this moment.

As the timer counted down, the inside of that paper sandwich was undergoing some remarkably complicated processes. One side, the negative, dampened with goo, had developed in a few seconds. Where its silver-halide crystals had been exposed--in what were the lightest, whitest areas of the subject--they had turned dark. The remaining silver halide unexposed, was being chemically induced to send its silver across to the photo paper, where it made the dark areas of the final print. That was one of Land's great breakthroughs. The stuff that normally went down a darkroom drain was instead being used to make the picture itself. The fifty seconds on the timer wound down, and Land grasped one corner of the print, steeled himself, and peeled it off.

What he revealed was a perfect sepia portrait of himself. It may have been an accident that the 8-by-10 camera produced a photo almost the same size as his actual face, but that only added to the eeriness: There was Land, sitting at a table in his striped tie, displaying a fresh picture in which he sat at the same table, wearing the same striped tie. Wensberg says that "a gasp rippled around the room," and the New York Times reporter immediately demanded that he do it again. Land happily complied. The Polaroid team spent the rest of the evening shooting pictures of the dinner guests at the conference, and answered all their questions.