I got, finally, the hands I always wanted. 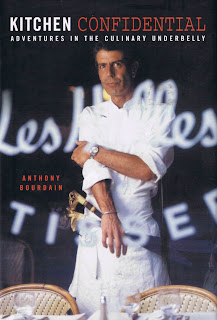 Kitchen Confidential: Adventures in the Culinary Underbelly
By Anthony Bourdain

"There are better chefs in the world. One comes reluctantly, yet undeniably, to that conclusion early in one's career. There's always some old master or new hotshot who's doing things with food you never would have thought of -- if they hadn't done it first. And of course, in the thin air at the peak of the culinary Mount Olympus, where the three- and four-star demi-gods dwell -- guys like Eric Ripert, Grey Kunz, Bouley, Palladin, Keller, you know the names, I don't have to tell you -- they have the added advantage of not only being geniuses or near-geniuses, but they tend to command crews that are larger, better trained, and more single-minded in their zeal. This didn't just happen, mind you. These guys don't get hundreds of hungry young culinarians banging on their kitchen doors, begging for the privilege of mopping their brows and peeling their shallots just because they have their names stitched on their jackets. Nobody is building million-dollar kitchen facilities around their chef, shelling out for combi-steamers, induction burners, fine chine, Jade ranges, crystal sniffers and fistfuls of white truffles because the guy can sling steaks faster than the other guy, or because he has a cute accent. Cream rises. Excellence does have its rewards. For every schlockmeister with a catch-phrase and his own line of prepared seasonings who manages to hold American television audiences enthralled, there are scores more who manage to show up at work every day in a real kitchen and produce brilliantly executed, innovatively presented, top-quality food. I am, naturally, pissed off by the former, and hugely impressed by the latter."
(pp. 255-6)

"In my kitchens, I'm in charge, it's always my ship, and the tenor, tone and hierarchy -- even the background music -- are largely my doing. A chef who plays old Sex Pistols songs while he breaks down chickens for coq au vin is sending a message to his crew, regardless of his adherence to any Escoffier era merit system. A guy who employs, year after year, a sous-chef like Steven Tempel is clearly not Robuchon -- or likely to emulate his successes. It is no coincidence that all my kitchens over time come to resemble one another and are reminiscent of the kitchens I grew up in: noisy, debauched and overloaded with faux testosterone -- an effective kitchen, but a family affair, and a dysfuncitonal one, at that. I coddle my hooligans when I'm not bullying them. I'm visibly charmed by their extra-curricular excesses and their anti-social tendencies. My love for chaos, conspiracy and the dark side of human nature colors the behavior of my charges, most of whom are already living near the fringes of acceptable conduct."
(pp. 256-7)

"If there was any justice in this world, I would have been a dead man at least two times over. By this, I mean simply that many times in my life the statistical probabilities of a fatal outcome have been overwhelming -- thanks to my sins of excess and poor judgment and my inability to say no to anything that sounded as if it might have been fun. By all rights I should have been, at various times: shot to death, stabbed to death, imprisoned for a significant period of time, or at very least, victimized by a casaba-sized tumor.
I often use the hypothetical out-of-control ice-cream truck. What would happen if you were walking across the street and were suddenly hit by a careening Mister Softee truck? As you lie there, in your last few moments of consciousness, what kind of final regrets flash through your mind? 'I should have had a last cigarette!' might be one. Or, 'I should have dropped acid with everybody else back in '74!' Maybe: 'I should have done that hostess after all!' Something along the lines of: 'I should have had more fun in my life! I should have relaxed a little more, enjoyed myself a little more...'
That was never my problem. When they're yanking a fender out of my chest cavity, I will decidedly not be regretting missed opportunities for a good time. My regrets will be more along the lines of a sad list of people hurt, people let down, assets wasted and advantages squandered.
I'm still here. And I'm surprised by that. Every day."
(p. 272)

"I got, finally, the hands I always wanted. Hands just like the ones Tyrone taunted me with all those years ago. Okay, there are no huge water-filled blisters -- not this weekend anyway. But the scars are there, and as I lie in bed, I take stock of my extremities, idly examining the burns, old and new, checking the condition of my calluses, noting with some unhappiness the effects of age and hot metal.
At the base of my right forefinger is an inch-and-a-half diagonal callus, yellowish-brown in color, where the heels of al the knives I've ever owned have rested, the skin softened by constant immersions in water. I'm proud of this one. It distinguishes me immediately as a cook, as someone who's been on the job for a long time. You can feel it when you shake my hand, just as I feel it on others of my profession. It's a secret sign, sort of a Masonic handshake without the silliness, a way that we in the life recognize one another, the thickness and roughness of that piece of flesh, a résumé of sorts, telling others how long and how hard it's been. My pinky finger on the same hand is permanently deformed, twisted and bent at the tip -- a result of poor whisk handling. Making hollandaise and béarnaise every day for Bigfoot, I'd keep the whisk handle between pinky and third finger, and apparently the little finger slipped out of joint unnoticed and was allowed to build up calcium deposits, until it became what it is today, freakish-looking and arthritic ... It's been twenty-seven years since I walked into the Dreadnaught kitchen with my hair halfway down my back, a bad attitude, and a marginal desire to maybe do a little work in return for money. Twenty-six years since my humiliation at Mario's when I looked up at Tyrone's mightily abused claws and decided I wanted a pair like that. I don't know who said that every man, at fifty, gets the face they deserve, but I certainly got the hands I deserve. And I've got a few years to go yet."
(pp. 301-2)
Posted by Noelia de la Cruz at 11:17 AM