Perhaps omelet skills should be learned at the same time you learn to fuck. 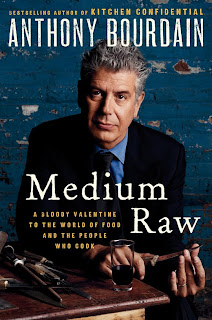 Medium Raw: A Bloody Valentine to the World of Food and the People Who Cook
By Anthony Bourdain

"At no point in Kitchen Confidential, that I can find, does it say that cocaine or heroin were good ideas. In fact, given the book's many episodes of pain, humiliation, and being constantly broke-ass, one would think it almost a cautionary tale. Yet, at readings and signings, I am frequently the inadvertent recipient of small packets of mysterious white powder; bindles of cocaine; fat, carefully rolled joints of local hydro, pressed into my palm or slipped into my pocket. These inevitably end up in the garbage -- or handed over to a media escort. The white powders because I'm a recovered fucking addict -- and the weed 'cause all I need is one joint, angel dust-laced by some psycho, to put me on TMZ, running buck-naked down some Milwaukee street with a helmet made from the stretched skin of a butchered terrier pulled down over my ears.
Smoking weed at the end of the day is nearly always a good idea -- but I'd advise ambitious young cooks against sneaking a few drags mid-shift at Daniel. If you think smoking dope makes you more responsive to urgent calls for food from your expeditor, then God bless you, you freak of nature you. If you're anything like me, though, you're probably only good for a bowl of Crunchberries and a Simpsons rerun.
On the other hand, if you're stuck heating up breakfast burritos at Chili's -- or dunking deep-fried macaroni at TGI McFuckwad's? Maybe you need that joint.
Treating despair with drugs and alcohol is a time-honored tradition -- I'd just advise you to assess honestly if it's really as bad and as intractable as you think. Not to belabor the point, but if you look around you at the people you work with, many of them are -- or will eventually be -- alcoholics and drug abusers. All I'm saying is you might ask yourself now and again if there's anything else you wanted to do in your life.
I haven't done heroin in over twenty years, and it's been a very long time as well since I found myself sweating and grinding my teeth to the sound of tweeting of birds outside my window.
There was and is nothing heroic about getting off coke and dope.
There's those who do -- and those who don't.
I had other things I still wanted to do. And I saw that I wasn't going to be doing shit when I was spending all my time and all my money on coke or dope -- except more coke and dope.
I'm extremely skeptical of the "language of addiction." I never saw heroin or cocaine as "my illness." I saw them as some very bad choices that I walked knowingly into. I fucked myself -- and, eventually, had to work hard to get myself un-fucked.
And I'm not going to tell you here how to live your life.
I'm just saying, I guess, that I got very lucky.
And luck is not a business model."
(pp. 57-8)

"What specific tasks should every young man and woman know how to perform in order to feel complete?
What simple preparations, done well, should be particularly admired, skills seen as setting one apart as an unusually well-rounded deceptively deep, and interesting individual?
In a shiny, happy, perfect world of the future, what should every man, woman, and teenager know how to do?
They should know how to chop an onion. Basic knife skills should be a must. Without that, we are nothing, castaways with a can -- but no can-opener. Useless. Everything begins with some baseline ability with a sharp-bladed object, enough familiarity with such a thing to get the job done without injury. So, basic knife handling, sharpening, and maintenance, along with rudimentary but effective dicing, mincing, and slicing. Nothing too serious. Just enough facility with a knife to be on a par with any Sicilian grandmother.
Everyone should be able to make an omelet. Egg cookery is as good a beginning as any, as it's the first meal of the day, and because the process of learning to make an omelet is, I believe, not just a technique but a builder of character. One learns, necessarily, to be gentle when acquiring omelet skills: a certain measure of sensitivity is needed to discern what's going on in your pan -- and what to do about it.
I have long believed that it is only right and appropriate that before one sleeps with someone, one should be able -- if called upon to do so -- to make them a proper omelet in the morning. Surely that kind of civility and selflessness would be both good manners and good for the world. Perhaps omelet skills should be learned at the same time you learn to fuck. Perhaps there should be an unspoken agreement that in the event of loss of virginity, the more experienced of the partners should, afterward, make the other an omelet -- passing along the skill at an important and presumably memorable moment.
Everyone should be able to roast a chicken. And they should be able to do it well.
Given the current woeful state of backyard grilling, a priority should be assigned to instructing people on the correct way to grill and rest a steak. We have, as a nation, suffered the tyranny of inept steak cookery for far too long. There's no reason that generation after generation of families should continue to pass along a tradition of massacring perfectly good meat in their kitchens and backyards.
Cooking vegetables to a desired doneness is easy enough and reasonable to expect of any citizen of voting age.
A standard vinaigrette is something anyone can and should be able to do.
The ability to shop for fresh produce and have at least some sense of what's in season, to tell whether or not something is ripe or rotten might be acquired at the same time as one's driving license.
How to recognize a fish that's fresh and how to clean and filet it would seem a no-brainer as a basic survival skill in an ever more uncertain world.
Steaming a lobster or a crab -- or a pot of mussels or clams -- is something a fairly bright chimp could do without difficulty, so there's no reason we all can't.
Every citizen should know how to throw a piece of meat in the oven with the expectation that they might roast it to somewhere in the neighborhood of desired doneness -- and without a thermometer.
One should be able to roast and mash potatoes. And make rice -- both steamed and the only slightly more difficult pilaf method.
The fundamentals of braising would serve all who learn from them -- as simply learning how to make a beef bourguignon opens the door  to countless other preparations.
What to do with bones (namely, make stock) and how to make a few soups -- as a means of making efficient use of leftovers -- is a lesson in frugality many will very possibly have to learn at some point in  their lives. It would seem wise to learn earlier rather than later.
Everyone should be encouraged at every turn to develop their own modest yet unique repertoire -- to find a few dishes they love and practice at preparing them until they are proud of the result. To either respect in this way their own past -- or express through cooking their dreams for the future. Every citizen would thus have their own specialty.
Why can we not do this? There is no reason in the world.
Let us then go forward. With vigor."
(pp. 62-4)

I have a lot of work to do.

Email ThisBlogThis!Share to TwitterShare to FacebookShare to Pinterest
Labels: Anthony Bourdain, cooking, drugs, Medium Raw: A bloody valentine to the world of food and the people who cook