There it was, the Decision That Changed Everything. 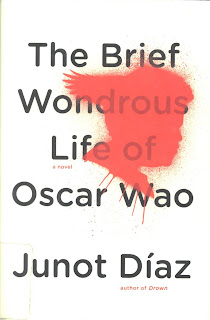 The Brief Wondrous Life of Oscar Wao
by Junot Díaz

Took me long enough to read this book. Maybe more about how I feel, the characters, and my Dominican-ness (or lack thereof, in some cases) later. For now, an excerpt:

"A week later the Brothers Then hired a replacement. A new girl. Constantina. In her twenties, sunny and amiable, whose cuerpo was all pipa and no culo, a "mujer alegre" (in the parlance of the period). More than once Constantina arrived to lunch straight from a night of patying, smelling of whiskey and stale cigarettes. Muchacha, you wouldn't believe el lío en que me metí anoche. She was disarmingly chill and could curse the black off a crow, and, perhaps recognizing a kindred spirit alone in the world, took an immediate liking to our girl. My hermanita, she called Beli. The most beautiful girl. You're proof that God is Dominican.
Constantina was the person who finally pried the Sad Ballad of Jack Pujols out of her.
Her advice? Forget that hijo de la porra, that comehuevo. Every desgraciado who walks in here is in love with you. You could have the whole maldito world if you wanted.
The world! It was what she desired with her entire heart, but how could she achieve it? She watched the flow of traffic past the parque and did not know.
One day in a burbuja of girlish impulse they finished work early and,taking their earnings to the Spaniards down the street, bought a pair of matching dresses.
Now you look candela, Constantina said approvingly.
So what you going to do now? Beli asked.
A crooked-tooth smile. Me, I'm going to the Hollywood for a dance. I have un buen amigo working in the door and from what I hear there'll be a whole assembly line of rich men with nothing to do but adore me, ay sí. She shivered her hands down the slopes of her hips. Then she stopped the show. Why, does the private-school princess actually want to come along?
Beli thought about it a moment. Thought about La Inca waiting for her at home. Thought about the heartbreak that was beginning to fade in her.
Yes. I want to go.
There it was, the Decision That Changed Everything. Or as she broke it down to Lola in her Last Days: All I wanted was to dance. What I got instead was esto, she said, opening her arms to encompass the hospital, her children, her cancer, America." (pp. 112-3)
Posted by Noelia de la Cruz at 6:44 PM