If you or I were told to write a few lines on the uncertainty of human fortunes, we should probably come much nearer to my imaginary sentence than to the one from Ecclesiastes. 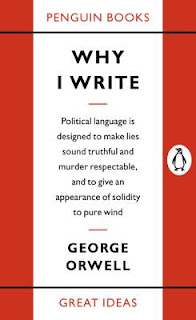 Why I Write
By George Orwell

"Now that I have made this catalogue of swindles and perversions, let me give another example of the kind of writing they lead to. This time it must of its nature be an imaginary one. I am going to translate a passage of good English into modern English of the worst sort. Here is a well-known verse from Ecclesiastes:

I returned, and saw, under the sun, that the race is not to the swift, nor the battle to the strong, neither yet bread to the wise, nor yet riches to men of understanding, nor yet favour to men of skill; but time and chance happeneth to them all.

Here it is in Modern English:

Objective consideration of contemporary phenomena compels the conclusion that success or failure in competitive activities exhibits no tendency to be commensurate with innate capacity, but that a considerable element of the unpredictable must invariably be taken into account.

This is a parody, but not a very gross one. Exhibit 3, above, for instance, contains several patches of the same kind of English. It will be seen that I have not made a full translation. The beginning and ending of the sentence follow the original meaning fairly closely, but in the middle the concrete illustrations -- race, battle, bread -- dissolve into the vague phrase 'success or failure in competitive activities.' This had to be so, because no modern writer of the kind I am discussing -- no one capable of using phrases like 'objective consideration of contemporary phenomena' -- would ever tabulate his thoughts in that precise and detailed way. The whole tendency of modern prose is away from concreteness. Now analyse these two sentences a little more closely. The first contains 49 words but only 60 syllables, and all its words are those of everyday life. The second contains not a single fresh, arresting phrase, and in spite of its 90 syllables it gives only a shortened version of the meaning contained in the first. Yet without a doubt it is the second kind of sentence that is gaining ground in modern English. I do not want to exaggerate. This kind of writing is not yet universal, and outcrops of simplicity will occur here and there in the worst-written page. Still if you or I were told to write a few lines on the uncertainty of human fortunes, we should probably come much nearer to my imaginary sentence than to the one from Ecclesiastes."
(p. 110-1)