That's where I end up, definitely maybe, always circumspect, always circumscribed by questions, by curiosity, by a certainty that I need a certain amount of uncertainty. 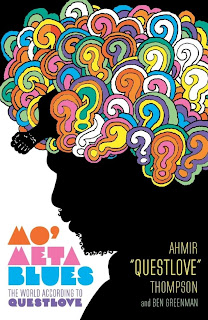 Questlove names at least 299 tracks throughout the course of the memoir. I know because I wrote down every single one and then tried to find them on Spotify. I only found 299; there were 10-12 (about?) tracks that were not listed. And that's also not counting the albums he mentioned, and all of the songs within those albums. I am only one person, after all. So ya. A lot of music. Super enlightening. I think most of the people who read Mo' Meta Blues will appreciate it differently, having been more familiar with the genre. I was just really excited to learn something new.


"And so that's how it goes. I keep moving through time and time keeps moving through me. And through that process, life takes shape. The question is what shape it is. I'm not the first person to ask this question, or to see how absurd it is to think there's a real answer. Maybe life's a circle. Maybe what goes around comes around. Maybe there's karma and an account ledger that balances off all debts and credits. Part of me believes that: the part of me that remembers that my drums are circles, that turntables are circles. But drumsticks are straight, and there are times when life seems like an arrow that goes in one direction and one direction only, toward a final target that might not be a final reward. Part of me believes that, too: the part of me that sees the "dun" in undun, and that believes that the story of that record, the life that ends before it's properly told, the life that has to unspool in reverse to exist at all, is the more common form of life. Music has the power to stop time. When I listen to songs, I'm transported back to the moment of their birth, which is sometimes even before the moment of my birth. Old songs, rock or soul or blues, still connect with me because the human emotions in them, whether jealousy or rage or hope, are recognizably similar to the emotions that I'm feeling now. But I'm feeling all of them, all the time, and so the songs act like a chemical process that isolates certain feelings at certain times: maybe one song helps illuminate the resignation. Music has the power to stop time. But music also keeps time. Drummers are time keepers. Music conserves time and serves time, just as time conserves and serves music. I think I have to believe in circularity, even if I know that the arrow's coming in on the wing. I think I have to cast my lot with cycles, and revolution, with the Beach Boys' "I Get Around" and Chuck Berry's "Around and Around" and James Brown's "World Cycle Inc." Will the circle be unbroken? That's not the only circle that's a question. Every circle is. Lines are statements. Arrows are especially emphatic statements. They divide and they define. They count up and count down. Circles are more careful. They come around again. They overthink. They analyze. They go back to the scene of the crime. They retrace their steps. That's where I end up, definitely maybe, always circumspect, always circumscribed by questions, by curiosity, by a certainty that I need a certain amount of uncertainty."
(pp. 271-2)
Posted by Noelia de la Cruz at 10:52 PM