Now the women I admire most are women who never pretend to be different than they are. 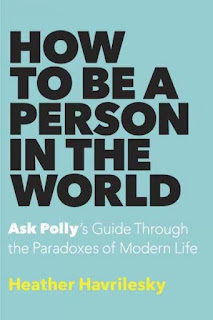 How to be a Person in the World: Ask Polly's Guide Through the Paradoxes of Modern Life
By Heather Havrilesky

I know it's not fair, but I can't help compare this compilation of letters to Cheryl Strayed's Tiny Beautiful Things. Strayed masters language and storytelling in a way that exceeds everything/one else in this category. But that's not to say Havrilesky's words haven't also resonated with me deeply.

The good and bad thing about me abandoning everything/taking time off/being alone is confronting myself every day. Especially my flaws. Am I always nice? No. Do I try to be? Always. Am I nice because I think that's an honorable trait? Yes. Am I also "too nice" because I hate being disliked and because confrontations and conflict make me uncomfortable? Also yes.

I'm working on being less of the latter nice. Havrilesky's advice:

"Experiments in asking for exactly what you want will go badly. Do it anyway. Do it and expect people to react badly. Because you're sensitive, you won't like this. Think about how they feel, and try to empathize. Think about how you might soften your message. Watch how other people do it. I know it sounds like a management technique, but good communicators usually start with something positive, then move to the negative gently: "I love this about you, but I have to draw the line here." "I know you're trying your best, but this is what I still need from you." "I care about you so much and you're such an important friend to me, but I don't think I can do this one thing."
Listen closely when someone asserts his or her boundaries. Because that's healthy behavior, even if it's not to your taste at this point. Learn from them. Because most people avoid problems instead of asserting themselves. They clam up. They disappear. That's the coward's path, even if it's a path a lot of us take.
I used to admire people who could hang with anything. Now the women I admire most are women who never pretend to be different than they are. Women like that express their anger. They admit when they're down. They don't beat themselves up over their bad moods. They allow themselves to be grumpy sometimes. They grant themselves the right to be grouchy, or to say nothing, or to decline your offer without a lengthy explanation.
Sometimes it seems like the rest of us are on a never-ending self improvement conveyor belt. We're running faster and faster, struggling to be our best selves, but every day we fail and we hate ourselves for it.
Fuck that. Let's be mortal. Let's not be sexy warrior princesses or burlesque dancers in burkas or conquistadors with cookies in the oven. How many years do we have to wait just to speak our minds? Let's be flinty and unreasonable instead. Let's tell the truth, without a smile. Let's let our words drip, one by one, without explanation, without apology, like the first few pebbles before a landslide."
(pp. 84-5).
Posted by Noelia de la Cruz at 1:19 PM

Email ThisBlogThis!Share to TwitterShare to FacebookShare to Pinterest
Labels: advice, Ask Polly, guide, Heather Havrilesky, How to Be A Person in the World, kindness, modern life, personality, women