My President Was Black. 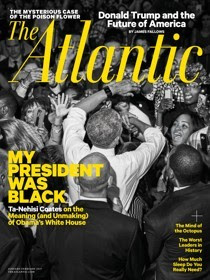 My President Was Black
By Ta-Nehisi Coates

Yes yes yes he was. Hard not to mourn and I don't have much else to add to what's already been said. I am sad and scared but also energized and not willing to give up just yet. Comforted by many people who feel the same and inspired by them to stay vigilant.

"The ties between the Obama White House and the hip-hop community are genuine. The Obamas are social with Beyoncé and Jay-Z. They hosted Chance the Rapper and Frank Ocean at a state dinner, and last year invited Swizz Beatz, Busta Rhymes, and Ludacris, among others, to discuss criminal-justice reform and other initiatives. Obama once stood in the Rose Garden passing large flash cards to the Hamilton creator and rapper Lin-Manuel Miranda, who then freestyled using each word on the cards. “Drop the beat,” Obama said, inaugurating the session. At 55, Obama is younger than pioneering hip-hop artists like Afrika Bambaataa, DJ Kool Herc, and Kurtis Blow. If Obama’s enormous symbolic power draws primarily from being the country’s first black president, it also draws from his membership in hip-hop’s foundational generation.

That night, the men were sharp in their gray or black suits and optional ties. Those who were not in suits had chosen to make a statement, like the dark-skinned young man who strolled in, sockless, with blue jeans cuffed so as to accentuate his gorgeous black-suede loafers. Everything in his ensemble seemed to say, “My fellow Americans, do not try this at home.” There were women in fur jackets and high heels; others with sculpted naturals, the sides shaved close, the tops blooming into curls; others still in gold bamboo earrings and long blond dreads. When the actor Jesse Williams took the stage, seemingly awed before such black excellence, before such black opulence, assembled just feet from where slaves had once toiled, he simply said, “Look where we are. Look where we are right now.” This would not happen again, and everyone knew it. It was not just that there might never be another African American president of the United States. It was the feeling that this particular black family, the Obamas, represented the best of black people, the ultimate credit to the race, incomparable in elegance and bearing."


"And I also knew that the man who could not countenance such a thing in his America had been responsible for the only time in my life when I felt, as the first lady had once said, proud of my country, and I knew that it was his very lack of countenance, his incredible faith, his improbable trust in his countrymen, that had made that feeling possible. The feeling was that little black boy touching the president's hair. It was watching Obama on the campaign trail, always expecting the worst and amazed that the worst never happened. It was how I'd felt seeing Barack and Michelle during the inauguration, the car slow-dragging down Pennsylvania Avenue, the crowd cheering, and then the two of them rising up out of the limo, rising up from fear, smiling, waving, defying despair, defying history, defying gravity."

Plus, here is a nice interview Coates does with Trevor Noah where he talks more about this piece and Obama as our first black president.
Posted by Noelia de la Cruz at 7:38 PM