I could no longer be concerned about how standing up for myself was going to impact someone who didn't care all that much about belittling me. 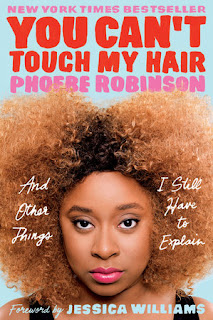 You Can't Touch My Hair: And Other Things I Have to Explain
By Phoebe Robinson

Excerpt from what I believe to be the most powerful chapter in this book:

"I felt sorry that he cared more about someone thinking he's racist as opposed to correcting the behavior that would lead someone to feel that way. I felt sorry that after asking two black people to explain why what he did was wrong, he learned nothing from either of us. And most of all, I felt sorry because he was so self-absorbed, he will, most likely, do something like this to someone else--and that person might not be able to handle it as well as I did. And when I couldn't feel sorry anymore, I just wanted to laugh because this bizarre rite of passage of being called "uppity" wasn't even mine to claim at this point, because he had made it all about him. I was just a witness to his emotional breakdown. I was also concerned: Since there were more episodes to shoot, how would the dynamic change on set? What would happen if I left the show? How would that affect the crew? How would my character's absence be explained in the remaining episodes?
After a while, I told myself to stop with the questions. I could no longer be concerned about how standing up for myself was going to impact someone who didn't care all that much about belittling me. At the same time, though, my thoughts kept returning to the rest of the cast, which was, by far, the most diverse one I had ever worked with. Who knew when I was going to get an opportunity like that again? After all, acting with a cast that was intentionally designed to depict POCs and gays as regular people is something that doesn't happen all too often. So I weighed the options: finish what I started or tell White Director I was moving on. I chose to shoot my last episode, which not only allowed me to spend more time with the sea of brown faces in the cast, but, in a stroke of luck, also turned into a paid gig. WD felt guilty enough to compensate the entire cast for the first three episodes we had performed in, marking the first time in history that reparations happened faster than the time it takes to have an item shipped to your house via Amazon Prime. In all seriousness, it turned out that being a team player paid off. Literally, which was nice, but I didn't care about the money, even though I was thrilled my making a stand benefited the rest of the cast. What I cared about was my Sidney Poitier-esque stoicism that was on full display during the showdown with the reality TV judges had morphed into something different. More powerful, direct, and better.
Don't get me wrong: remaining steadfast and not letting others see you break is one version of noble. One form of brave. And perhaps given how brutal the world is, this stoicism may even be necessary and the only reliable protection one has. This protection seems to be something that comes preinstalled in me and possibly in the souls of all black folks. It allows us, much like the adamantium that courses through Wolverine's skeleton, to be self-healing in the face of the daily micro- and macro-aggressions, to remind us to carry on, my wayward son. But it turns out for me that carrying on isn't enough. Holding my head high and rising above doesn't make me feel strong or fierce. It makes me feel stifled. Almost as if I'm choking on a tiny injustice and that one of these days, the right injustice in the right shape and size is going to lodge itself in my throat and take my voice and my very last breath. Therefore, the only reliable protection for me is to speak up. On that day with that White Director, I made the choice to never again be quiet, to never again suck it up. I challenged him. And I will do it again. If that makes me uppity, so be it. At least people know I'm no longer a vessel that they can use to act out their racist feelings. They will know that I think I'm worth fighting for. They will know that I have a fire burning inside me. They will know that I'm alive."
(pp. 156-8)