I'd just gained awareness, and now I noticed even more how acutely imperfect I was. 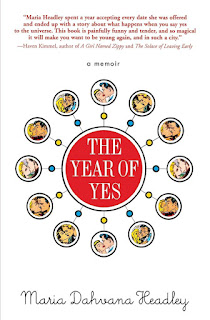 The Year Of Yes
By Maria Dahvana Headley
"Like all the other citizens who'd come from nowhere to this, the great somewhere, I felt like I'd finally found home. I could relax into the hum of the trains under the asphalt, the steam rising from manholes, the goth clubs downtown and the clip-clop of the horse-drawn carriages in Central Park. Every day, I wadded up and lay aside more of what I'd really come from: a crazy father who raised sled dogs in the desert, a lot of sorrow I wanted to forget.
In my experience, the mentally ill were like black holes, into which you could pour everything you had, only to find that they'd been off apprehending aliens in the desert of their dreams and hadn't been listening to a word you'd said. I was paralyzed with guilt over my dad, and helpless to help him. I had a nightmare that someday he'd hop a train (he'd been known to do things like that, though now he hardly left his house) and appear on my doorstep, demanding care, demanding housing and feeding and attention. In my brain, he was like a character out of Beckett, popping his head occasionally from under a garbage can lid, calling for something muddled and humiliating. I loved him, but I couldn't save him. I knew that much. I tried not to think about it. Every time I saw a homeless person, I thought of my dad, then cast the thought out from my mind, ground it into the sidewalk like a cigarette, and walked quickly away, resisting the temptation to look back. Whatever was following me would just have to stay in Hades. I drank from Lethe every other day, and it never had the desired effect."
(p. 145)
"I thought sadly about the predicament of the modern man, wrapped in a silky shroud of guilt, comfortably wallowing across guilty sheets. Were there any good ones left? If so, where the hell were they?
I tried to focus on school, on living, and not on the fact that the Year of Yes was almost over. Though I'd changed from the inside out, I hadn't found someone willing to take me for what I now was. Unfortunately, there  was no going back.
On paper, it was so easy to search through your old drafts and find that darling you'd killed. You could reinstate the passage, as though you'd never even thought about murder. In life, not so. You'd change a part of yourself—a flawed part, maybe, but a flawed part you might have, secretly, been a little bit in love with. You'd know it was for the best, that you'd only manage to proceed if you revised whatever thing was messing up the overall structure of your existence. But inevitably, at some point, you'd want to go back on the changes. It would be easier to stay the same old rumpled version, the same typos and blotches, the same old severe climactic flaws.
I found myself trying to think my old judgmental things as I walked down the street. Instead I'd end up talking to everyone I saw, spending half my day sitting down next to strangers. Letting them tell me everything. Giving them love.
It wasn't like I'd made myself perfect. Far from it. I'd just gained awareness, and now I noticed even more how acutely imperfect I was. I was willing to do all kinds of things that I knew better than to do. Like, for example, fall madly in love again. With someone I knew very well was a very bad idea."
(p. 259)
Posted by Noelia de la Cruz at 5:10 PM