To learn to swim in the ocean of not knowing—this is my constant work. 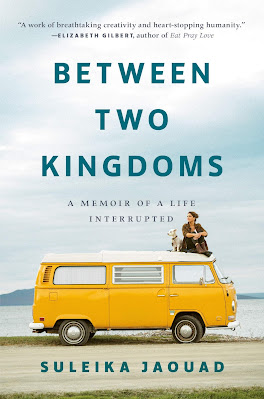 Between Two Kingdoms: A Memoir of a Life Interrupted
By Suleika Jaouad
As I read and (mostly) listened to Between Two Kingdoms, I remained most astounded by Suleika's generosity. It feels inappropriate to share that her pain provided perspective, but that she is so open with her story is a gift. I was grateful many times—for the window into her experiences, the affecting language she used to describe them, and her overall grace. She shares the same desire to deep-know people so though our experiences are miles apart, I felt connected and invested in her journey.
At its end, three messages were reinforced—1) as I continue on my mission to learn to love better, I'd been given examples in abundance of how to do so; 2) I am fortunate; 3) I had better make the most of my life.
"I decided to reimagine my survival as a creative act. If chemo sores in my mouth made it too painful to talk, I would find new ways to communicate. As long as I was stuck in bed, my imagination would become the vessel that allowed me to travel beyond the confines of my room. If my body had grown so depleted that I now had only three functional hours each day, I would clarify my priorities and make the most of how I spent the time I had.
With this in mind, I reorganized my bedroom so that everything I needed was within arm's reach: a small night table littered with pens, notebooks, and paper; a bookshelf filled with my favorite novels and volumes of poetry; a wooden board that I placed atop my knees as a desk. I wrote when I was home, and I wrote each day that I found myself back in the hospital. I wrote until the anger and envy and pain bled dry—until I could no longer hear the persistent beeping of monitors, the hiss of respirators, the alarms that constantly went off. I had no way of predicting all the places the Hundred-Day Project would take me, but what I knew, for now, was that I was starting to find my power."
(p. 109)
Earlier in this chapter, she shares how her family and boyfriend also participated in the Hundred-Day Project. Her ex Will shared a daily video from the outside, her mother painted ceramic tiles, and her father wrote 101 childhood memories and gave them to her in a book on Christmas—a great idea I'm considering.
""Write," instructs Annie Dillard, "as if you were dying." We are all terminal patients on this earth—the mystery is not "if" but "when" death appears in the plotline. With my transplant date looming, her words rang loudly. My mortality shadowed each breath, each step that I took, more present now than it had ever been. A manic energy hummed through me. I worked around the clock for a month to draft thirteen columns before I entered the transplant unit, fueled by knowledge that it was going to be a long time before I was well enough to write or walk or do much of anything else again. What would you write about if you knew you might die soon? Bent over my laptop in bed, I traveled to where the silence was in my life. I wrote about my infertility and how no one had warned me of it. About learning to navigate our absurd healthcare system. About what it meant to fall in love while falling sick, and how we talk—or don't talk—about dying. I wrote about guilt. I also wrote a will in case I fell on the wrong side of the transplant odds. To this day, I've never been more prolific. Death can be a great motivator.
On March 29, 2012, my column and an accompanying video series—called "Life, Interrupted"—was scheduled to make its debut. Just a few days after that I would receive the bone marrow transplant. The confluence of these impending milestones was dizzying: a dream and a nightmare dancing the tango."
(p. 119)
"When I arrive at the hotel, Jon is waiting in the lobby. The two of us go way back to band camp, where we met as teenagers. Jon was gangly and awkward then, with a mouth full of braces and baggy, ill-fitting clothes, so shy he bordered on mute. He's since undergone a transformation. Now, with his thick New Orleanian drawl, virtuosic piano chops, and dapper style, he has the kind of magnetic presence that turns heads and draws everyone in a room. Tall and slim, dressed impeccably in a tailored suit and leather boots, he's handsome enough to startle me. His skin, a dark honey brown, looks luminous, and his features—those lips, aquiline nose, and broad shoulders—give him the majestic air of a prince. Jon catches my eye from across the lobby, and as I walk across the room to greet him, I wobble a little under his gaze."
(p. 201)
"To learn to swim in the ocean of not knowing—this is my constant work."
(p. 265)
Posted by Noelia de la Cruz at 7:11 AM