When I go down there, I can't wait to come back up 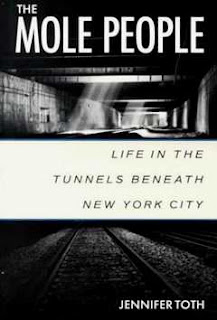 The Mole People: Life in the Tunnels Beneath New York City by Jennifer Toth
From chapter: Bernard's Tunnel

Like Bernard, Bob earns what little money he needs by "busting," or returning discarded cans and bottles to redemption centers. For 600 empties, they can receive $30, or a nickel each. A major problem is finding groceries to redeem the trash, however. Despite the law requiring stores to take up to 250 empties from any one person, storekeepers often refuse in an effort to discourage the homeless from entering their premises. A few nonprofit redemption centers exist, notably "We Can" at 12th Avenue and 52nd street, which was begun by Guy Polhemus when he overheard homeless at a soup kitchen complain about their difficulty. However, these centers tend to be inconvenient and very crowded, with long lines and long waits.
This has led to the rise of middlemen, also called two-for-oners although they should be one-for-twoers. They buy two empties for a nickel, half the price at regular redemption centers, but offer "no waiting, no sorting, no hassle," as Bob says. Some middlemen have become full-blown entrepreneurs, like Chris Jeffers, a twenty-year-old who was sleeping in Riverside Park just two years earlier but now makes $70,000 a year. He rents an empty theater at Eighth Avenue and 50th Street and keeps it open around the clock for the homeless to bring their cans and bottles; it pays half the price, but it's convenient. Jeffers, who says he took some college courses in finance in Tampa, Florida, resells the empties to "We Can" for the full redemption price, earning thousands of dollars a day. Most of the collectors go through the trash at night when they are less visible to the public. Many are addicts of one kind or another, Jeffrey says, and often want to redeem their cans after hours to feed their night needs. "I know some people will say I'm exploiting those with alcohol and drug problems," Jeffers admitted to a New York Times reporter. "But tell me, how is what I'm doing any different from what commodity traders do when they buy crops at low prices from farmers in distress? (p. 107)

"When I go down there, I can't wait to come back up. I keep promising myself that the next mural will be my last. I hate the danger, I hate risking my life each time for something so stupid. But I get an idea in my head for a piece and I can't get rid of it, and I have to do it because, if I don't, no one else will." More than a decade ago, when trains wore graffiti, Chris gave designs to graffiti gangs eager to prove their daring by executing them. He was far less interested in braving the dangers than in seeing his concept completed and appreciated." (p. 123)

Perhaps his most famous work is the mural that took up the side of an entire subway car, a photograph of which almost got to the Museum of Modern Art as part of its "High and Low: Modern Art and Popular Culture" show. The exhibit featured great masters, their impact on street art, and in turn, street art's impact on them. Freedom's work was a version of Michelangelo's Creation, an ephemeral hand reaching down from a white cloud to touch fingertips with another from below. Across the bottom he scrawled the words "What is Art. Why is art." The photograph of the car with the mural was incorporated into the sixty-page catalog, but in the end the museum chose not to display the picture for fear it would alienate trustees and donors who might interpret it as an endorsement of graffiti. (p. 125)

My thoughts about this ethnography when I finish the book.
Posted by Noelia de la Cruz at 1:33 AM