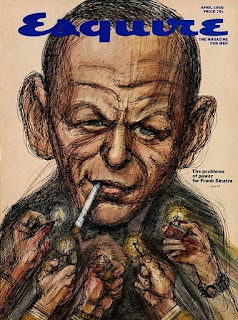 "In an age when the very young seem to be taking over, protesting and picketing and demanding change, Frank Sinatra survives as a national phenomenon, one of the few prewar products to withstand the test of time."


"The two blondes, who seemed to be in their middle thirties, were preened and polished, their matured bodies softly molded within tight dark suits. They sat, legs crossed, perched on the high bar stools. They listened to the music. Then one of them pulled out a Kent and Sinatra quickly placed his gold lighter under it and she held his hand, looked at his fingers: they were nubby and raw, and the pinkies protruded, being so stiff from arthritis that he could barely bend them. He was, as usual, immaculately dressed. He wore an oxford-grey suit with a vest, a suit conservatively cut on the outside but trimmed with flamboyant silk within; his shoes, British, seemed to be shined even on the bottom of the soles. He also wore, as everybody seemed to know, a remarkably convincing black hairpiece, one of sixty that he owns, most of them under the care of an inconspicuous little grey-haired lady who, holding his hair in a tiny satchel, follows him around whenever he performs. She earns $400 a week."


"They nodded, nobody mentioning the past hysteria in the Sinatra world when it seemed CBS was zeroing in on the man; they just nodded and two of them laughed Sinatra's apparently having gotten the word "bird" on the show--this being a favorite Sinatra word. He often inquires of his cronies, 'How's your bird?'; and when he nearly drowned in Hawaii, he later explained, 'Just got a little water on my bird'; and under a large photograph of him holding a whiskey bottle, a photo that hangs in the home of an actor friend named Dick Bakalyan, the inscription reads: 'Drink, Dickie! It's good for your bird.'"


"He also said that he'd been unable to get front-row seats for everybody, and so some of the men--including Leo Durocher, who had a date, and Joey Bishop, who was accompanied by his wife--would not be able to fit in Frank Sinatra's row but would have to take seats in the third row. When Entratter walked over to tell this to Joey Bishop, Bishop's face fell. He did not seem angry; he merely looked at Entratter with an empty silence, seeming somewhat stunned.
'Joey, I'm sorry,' Entratter said when the silence persisted, 'but we couldn't get more than six together in the front row.'
Bishop still said nothing. But when they all appeared at the fight, Joey Bishop was in the front row, his wife in the third."


"Nevertheless, despite a tired voice, some deep emotion seeped into his singing during this time."


"Frank Sinatra, holding a shot glass of bourbon in his left hand, walked through the crowd. He, unlike some of his friends, was perfectly pressed, his tuxedo tie precisely pointed, his shoes unsmudged. He never seems to lose his dignity, never lets his guard completely down no matter how much he has drunk, nor how long he has been up. He never sways when he walks, like Dean Martin, nor does he ever dance in the aisles or jump on tables, like Sammy Davis."