I don't have to look at how much things cost on the menu when I'm ordering food anymore. 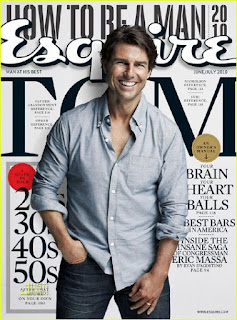 I was wondering where this issue went, though figured it had to be in the suitcase that I took to the Dominican Republic when I went in June. I spent a lot of my time there reading it. Never bothered to really look until I started packing to go back to Syracuse.

Anyway this was a great issue too. The 'How to be a man' issue. Irrelevant to me but still entertaining to read. "The Madness of Men," by Chris Jones is a great story. And the cover story, about Tom Cruise, who I'm pretty indifferent about, was refreshingly nice.

All I seemed to mark though were excerpts from "What I've Learned: Jon Favreau"

"I've always avoided physical confrontation. It was part of growing up in Queens--riding the subway to school every day. You definitely had the caribou mentality: Stick with the herd and avoid the predators."
Just because he's from Queens! Flushing, too!

"When it's my time to go, I hope I feel the same feeling I do when we wrap a movie: It was great. It was hard work. I wouldn't trade it for the world. But I'm glad it's over."

"My grandfather always said he didn't care when he got ripped off for money. He said he was most offended when somebody took his time. I didn't understand that at first. But I do now."
The former still offends me, lol


"You have to create the quiet to be able to listen to the very faint voice of your intuition."

"The definition of friendship changes over time. When you're little, you play next to someone. As you get older, you get to engage, connect and reveal. Later on, it becomes who you collaborate with and achieve goals with. It becomes bringing out the best in each other. Whatever the version, it's all about overcoming loneliness."

"You tend to gravitate to the things you grew up with. So I like Carvel even though it might not be a gourmet ice cream. I just had it with someone from L.A. He said, "This is what you were craving?" Yeah. Because you grew up with it and you love it."

"You don't want Citizen Kane to be your first gig. It must be a terrible burden. When fate parcels it out to you incrementally, it might seem frustrating at the time, but it's a blessing."

"The illusion is that the more you put into yourself, the happier you are. When your life becomes about something bigger than you, ironically, that's when it becomes the most fulfilling."

"I don't have to look at how much things cost on the menu when I'm ordering food anymore. That was a big deal."
Because I CANNOT WAIT to reach this part in my life.

I still don't even really know who he is, aside from the fact that he directed Iron Man 2. But I appreciated a lot of what he said, so.